This morning, WikiLeaks released 61,205 cables and documents from the Saudi Foreign Ministry. The massive leak is the latest in the non-profit organization’s controversial push for transparency in government institutions.

“The Saudi Cables lift the lid on a increasingly erratic and secretive dictatorship that has not only celebrated its 100th beheading this year, but which has also become a menace to its neighbours and itself.”

It may be uncomfortable, but democracies can handle forced transparency. Authoritarian states, not so much. #Wikileaks #SaudiArabia

The work of trawling through the documents, many of which are in Arabic and pertain to mundane administrative matters, is being crowed sourced on Twitter, where the hashtag #SaudiCables is buzzing as journalists, researchers, and citizen correspondents report their findings.

One document details a conversation about the Syrian revolution, and the plans (or lack thereof) for a post-Assad Syria.

The document is reproduced below, right side up: 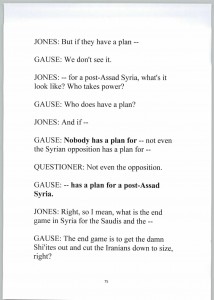 Some concern was raised over the treatment of sensitive personal information.

The same user posted a long document detailing concerns over some Saudis involvement in 9/11.

The cable candidly spoke of the involvement of a Saudi official with the Taliban and former al-Queda leader Osama bin Laden. It said, in part:

The full cable can be read here.

In a press release, WikiLeaks indicated they would be publishing around 70,000 documents today, and several more thousand over the coming weeks and months. Time will tell what these cables reveal.

Edward Snowden Takes Questions Via #AskSnowden, Has No Regrets