Julie Baker, a widowed mother of four, loves whimsy and rainbows. She installed a row of colorful solar lights on her front yard in Baltimore that spelled the words “Love” and “Ohana” (the Hawaiian word for “family”). she was quite surprise to find a printed note jammed through her front door from an anonymous concerned citizen with one clear message: “your kind need to have respect for GOD”.

Needless to say, it wasn’t cute. 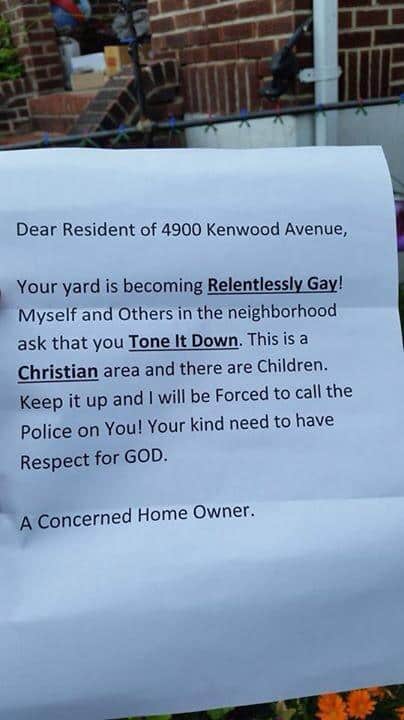 “Relentlessly Gay”? Baker herself pondered, “what does that even mean, anyway?” How do you even…?

Baker herself identifies as a bisexual woman, but says that the lights weren’t put up to make a statement. “The point of the rainbows isn’t about being gay,” she says  via Facebook chat. “It’s because we love rainbows. I have a rainbow tattoo on my arm. We’re going to decorate the white siding of our house with them.”

This hasn’t been the first time she’s faced the ire of her neighbors. “It was after one of the big eclipse events a few years back,” Baker recounts. “My daughters had lit candles celebrating our lives and put out incense as offerings to the universe. The next morning we found our pot bellied stove kicked over and a note that said ‘your kind are not wanted here’ it also mentioned devil worshiping and ended with a reminder that houses burn for no apparent reason. I didn’t sleep much after that note.”

Her seventeen-year-old daughter urged her to go public and post the note online. Word soon got around the Baltimore area. Baker also contacted the police, but they quickly dispensed of the matter saying there was no crime committed. She never got to investigate on who sent her the notes, but she noticed that they began showing up when she and her husband refused to attend the Presbyteran church across the street from their home.

My husband and I a long while ago were invited to attend the church across the street from us,” she says. “My husband declined and mentioned that he didn’t like church and joked I was a ‘heathen.’ I think it got mentioned around the neighborhood. I have no proof that the church was involved in this, though I would not be surprised.”

With this newest piece of nastiness, though, Miss Baker, plans to take this mess of homophobic behavior and poor capitalization skills, and turn it into something fabulous. she’s put up a GoFundMe campaign, calling on kind-hearted and cheeky supporters to crowdfund her biggest home improvement project yet.

Needless to say…  I need more rainbows… Many, many more rainbows….So, I am starting this fundraiser so I can work to make my Home even More “relentlessly gay”  If we go high enough, I will see if I can get a Rainbow Roof!

Because my invisible relentlessly gay rainbow dragon should live up there in style!

She had initially decided to target $5,000 for this campaign. Since then, supporters have thrown their money at her cause and the campaign has at present crowdfunded an impressive $19,886 and rising. skilled artisans and workers have also volunteered their time and craft to making this house one rainbow extravaganza.
“I’m a painting contractor in Baltimore. If you buy the paint I’ll ROY G. BIV your entire house,” says one volunteer. “I live in DC! I’m happy to travel to Baltimore to help with painting or just to dance in a sequin shirt on your front lawn. Happy Pride month!”, chimes in another. “I vote for a rainbow unicorn fountain,”Quips another commenter.

Baker concludes in her campaign note:” Put simply, I am a widow and the mother of four children, my youngest in high school and I WILL NOT Relent to Hatred. Instead, I will battle it with whimsy and beauty and laughter and love, wrapped around my home, yard and family!!!Thanks for your relentlessly gay support!

With the Supreme Court racing to declare same-sex marriage a constitutional right, these “concerned citizens” may want to rethink their notes — and keep their noses out of other people’s homes.