Don’t say Schwarzenegger didn’t warn you. The aging action film star dressed up as his hit character the Terminator to prank unsuspecting fans in Hollywood. In a city filled with celebrity impersonators, Schwarzenegger surprised hoards of tourists with his appearance. Best of all, it was all for charity.

The stunt was to benefit After-School All-Stars, a charity that provides after-school programs for children to help keep them safe and out of trouble. Across the country, the organization has helped thousands of underprivileged children.

“ASAS’ vision is for our All-Stars to be safe and healthy, to graduate high school and go to college, to find careers they love and then give back to their communities. ASAS serves 87,377 low-income, at-risk youth at 367 Title I schools in 15 major cities across the country — from New York to Hawaii.”

It is a proven fact that children that are involved in extracurricular activities stay out of trouble, and it is something that Arnold Schwarzenegger believes very strongly in. So strongly, that he was willing to parade around Hollywood dressed as the Terminator.

The video shows the actor pranking tourists by pretending to be a wax statue or photobombing snapshots with celebrity impersonators. The video is hilarious as it shows people posing for a selfie with the “statue” only to be freaked out when it suddenly moves. Surprise, it’s the Terminator. Uploaded to Arnold’s YouTube channel, the video is quickly going viral with more than 600,000 views.

In the video, Schwarzenegger explains about how donors to his cause can snag some pretty awesome benefits, like attending the Terminator Genisys Premiere with him and celebrating at the after party. You have a shot at winning the grand prize by entering the contest. All you have to do it donate to After-School All-Stars through the Omaze link Schwarzenegger promotes in the video.

“Come with me if you want to live… the most awesome night of your life! I’m back with a new, limited-time experience and you and a friend are invited as my special guests. We’ll ride together to the premiere of Terminator Genisys, take selfies and get interviewed on the red carpet, and watch the movie before any of your friends. Oh, did I mention we’ll drink Schnapps together at the afterparty to celebrate our big day and my return as the Terminator? Hasta la vista, baby.” 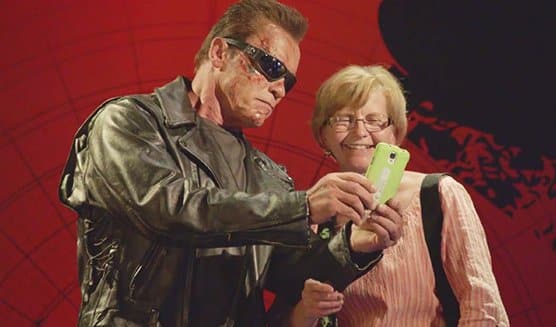 The lucky winner will get to ride with Arnold to the Terminator Genisys Premiere, drink Schnapps with Arnold at the exclusive star-studded after party, take selfies and get interviewed with Arnold on the red carpet and get flown to Los Angeles and put up in a 4-star hotel.

There even different levels of giving that will give you multiple entries into the contest and each amount comes with a specific thank-you gift.

If you have some extra income, these are some pretty sweet gifts. Plus, you are helping out a great cause. But you better hurry, there is only a day left to enter.