Earlier this year, we said hello to Diane’s Bare-breasted Glassfrog, a brand-new species of frog discovered in the deep Cuban rainforest, which also happens to bear a striking resemblance to Kermit the Frog.

Now, say hello to either (a) a real-life Pacman ghostie, (b) an undiscovered Pokemon, or (c) the next big thing in plush toy beasties. Pictures of the critter have been met with oohs and aahs (and a good helping of baby talk and cooing) online, and it hasn’t even been properly named yet. 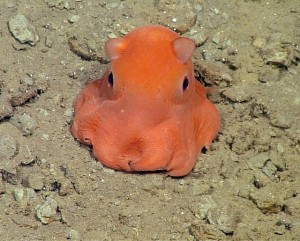 At present, its designated genus is Opisthoteuthis, a family of what is known as umbrella octopuses, which settles it quite nicely with its potential cousin, the flapjack octopus. (think of it; umbrella octopuses — can this little sweetheart get any cuter?!

Dr. Stephanie Bush of the Monterey Bay Aquarium Research Institute has dedicated years of study to this fist-sized octopus. she’s about to submit a report to a scientific review to determine the best name for this newly-discovered species — however, she is likely wont to call it “Opisthoteuthis Adorabilis”. “I don’t see any obvious reason why it would be inappropriate … it’s easy to pronounce and popular with the public,” Dr Bush said.

The Research institute has so far successfully harvested a number of these critters and placed them in carefully-conditioned environments to observe them and keep them as comfortable and happy as possible. A large vertical tank is best for their up-and-down billowing swim pattern. Infrared light is used to ensure they have just the right amount of light for their highly-sensitive eyes, and the water is kept chilly to better imitate the cold ocean floor they live in. “They spend most of their time on the bottom, sitting on the sediment, but they need to move around to find food, mates,” Dr Bush said.

Are these octopuses ready for the pet store? That might be too soon to answer. At present, there is still much to be learned from this wee eight-armed critter. So far, all twelve creatures under observation have been female, and one of them felt happy enough with its tank to deposit four eggs at the bottom. These eggs are currently cared for and observed. Dr. Bush says they may take two and a half years or more to hatch, but the effort poured into them will be well worth it.

This Sweet Shark Will Make You Smile [Video]