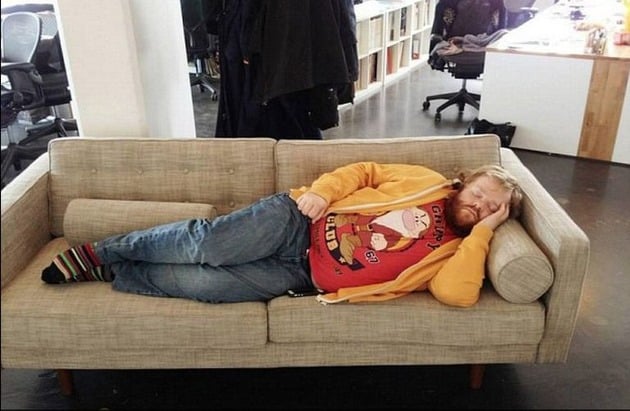 Ever been so sleepy, you just have to catch a nap? That’s exactly what happened to Haukur Viðar Alfreðsson. While at work, Haukur felt an overwhelming tiredness. So, while his coworkers went out to grab some lunch, he decided to grab a nap. Curling up on the office couch, Haukur fell into a deep sleep. His coworkers returned from their lunch and found him peacefully snoozing. So, they did what any fellow coworkers would do. They clicked a picture, then they began a Photoshop war.

The creative creations quickly became viral and people began putting their own spin on the snapshot. Haukur took to social media to explain just why he was so tired.

“This picture was taken on lunch. My co-workers decided to go out to grab a bite to eat and I decided to take a nap. I had stayed up the night before watching the NBA playoffs. which start at 1am and finish at 4am, and I had to be in the office the next day at 9am. ”

He then explained that his office is just full of pranksters.

“We often do this sort of prank where we take pictures of each other and alter them, but for some reason this time we decided to post it on our Facebook page. ‘Within a few hours my inbox was filling up with messages and I was getting contacted from all over the world asking me to speak on radio shows and appear on TV. It’s funny, because you always think that if you get famous, it will be because of something you did, but I got famous for taking a nap. It was the easiest achievement of my entire life.”

White House Tantrum Goes Viral, And The Memes Are Plentiful