With the recent release of the movie Jurassic World, it seems Time has played one elaborate and rather timely joke on us. (badum-tish!)

A recent finding shows that soft tissue and red blood cells has been discovered in a 75-million-year old fossil. And what’s more than that? The fossil had been sitting in the London National Museum for a whole century, without any particularly exceptional preservation techniques. (We reckon it might have been hiding in some dusty drawer in the basement, but you know, that’s just us and an over-active imagination.)

Now, this actually isn’t the first time scientists have discovered soft tissue in fossils. There have been many instances that prehistoric soft tissue was there — it’s just that these samples were found mostly in fossils that were exceptionally preserved, and underwent extra-special conditions to keep its current state. The fact that there was soft tissue discovered in a fossil that had absolutely no special treatment at all in terms of storage means the dinosaur’s soft tissue is actually hardier than most give it credit for. 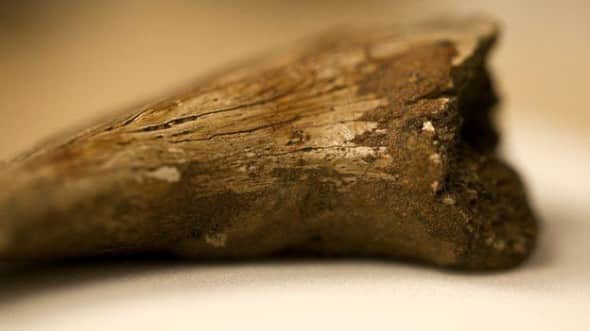 The fossil in question is a centuries-old claw fragment from a Therapod species, not unlike a T-rexes, Velociraptors, and oh yeah, modern-day birds. Scientists found the remains of blood cells, and genuine soft tissue remnants resembling collagen.

So, what have scientists learned so far from these samples?

Chemical analysis of the red blood cells show a striking similarity to those of modern-day emus (which, no surprise, is a distant relative down the therapod line.) The cells themselves are surprisingly small, meaning these cells were more warm-blooded than cod-blooded. (Cold-blooded animals like reptiles and amphibians have larger RBCs.) This could shed some light on the warm vs. cold-blooded debate. Given enough time, this could also point to a particular time when dinosaurs made that jump from cold to warm blood evolution-wise. then again, of course it’s still quite possible the red blood cells just shrank over the centuries.

Studying the soft tissue also showed evidence of the amino acids for dinosaur collagen. (You know, the stuff that makes up our skin and nails and hair — and pretty much functions as one of the basic building blocks of structural protein in all animals.) Studying the structure of these remnants could make way for more knowledge on collagen structures, and how dinosaurs are related to each other through these acids.

Any signs of DNA, though? At present, scientists agree that DNA does disintegrate over a relatively short pan of time — relative being a few million years, no big deal —  so no dice there. Dino DNA would indeed be considered the holy grail of paleontological discoveries, and would open the possibilities o cloning dinosaurs back to life, but as always — remember Jurassic Park.