We’ve all had our share of getting punk’d from time to time, and mostly have no recourse than to shake our fists futilely as the pranksters run off into the sunset, having done the deed and called it a day. However, one bus driver wasn’t having any nonsense out of a youngster on the streets of Brazil.

One viral video shot from the phone camera of one of the pranker‘s friends went viral this week. the prankster, a young boy, possibly a teenager given the height of his physique, pretends to wait for a bus to stop so he can board. As the doors hiss open,, the would-be  passenger lifts his leg — and rests it on the first step to tie his shoelaces, and nothing more. His friends watching and getting this stunt on camera think it’s a hoot, until the bus driver readily switches the doors to hiss back into position and trap the boy’s leg. When the posse realize what the driver had done, it starts to be no laughing matter. 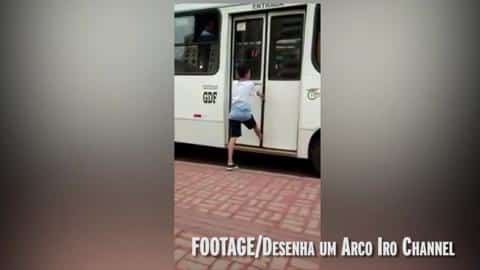 The conversation between the driver and the boy is something we might take as some sort of chastisement. Was he reprimanding the boy? He certainly didn’t sound angry enough to make it a scolding. Was he explaining why he did it? Maybe. We do think the boy was pleading to be let go, but the 300,000 view hits on Youtube alone isn’t going to make this pranker forget his stunt — and the accompanying lesson — for a very long time.

“This Is Why Mom Doesn’t Love You!” Brother’s Prank Goes Viral [Video]