On June 16, Pope Francis will release a ground-breaking encyclical letter calling for action on the environment and climate change, yet one of his boldest moves in his career as pontiff. It’s got many climate scientists and environmentalists around the world excited and rooting for the Pope — except for one particular GOP presidential nominee.

Rick Santorum, a devout Catholic, attests he’s a big fan of Pope Francis, but feels the pontiff should stay away from scientific issues, such as, well, climate change.

“The church has gotten it wrong a few times on science, and I think that we probably are better off leaving science to the scientists,” Santorum says in a radio interview on the Dom Giordano Show. “I think when we get involved with controversial political and scientific theories, then I think the church is probably not as forceful and credible. And I’ve said this to the bishops many times when they get involved in agriculture policy or things like that, that are really outside the scope of what the church’s main message is.”

*Santorum’s thoughts on the Pope start at the 10-minute mark.

While Pope Francis is indeed the world leader of the Roman Catholic church, it’s also prudent to remember that he actually has a Master’s Degree in Chemistry from the University of Buenos Aires. (We checked, and it’s totally legit.)That said, we think it’s safe to say that (1) The Pope certainly has the logic and skills necessarily to make a valid scientific claim, and (2) he knows what he’s talking about in that encyclical.

Besides, scientists around the world already agree that climate change is real. The Pope has a good head on shoulders by being conscious and concerned about climate change, whether or not he has a degree in Science. Climate change will affect everyone in terrible ways, and it’s up to us to act as soon as we can to make a difference that matters. 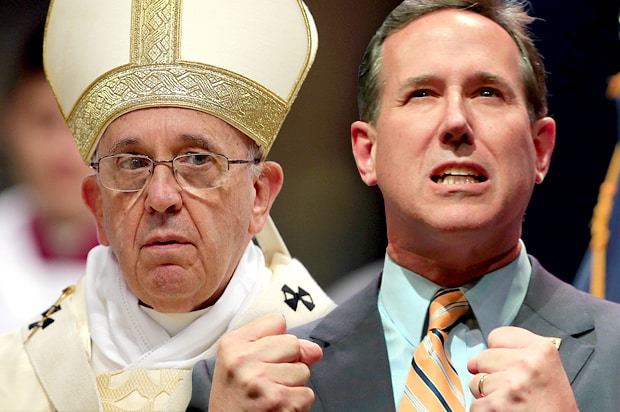 So with Rick Santorum, is it his pro-business beliefs that made him say “Nay”, or his trust in intelligent design?

Pope Francis, on the other hand, says that evolution doesn’t contradict church doctrine, so you know… Just sayin’.

Man Hangs up on “Pope Prank Caller”, Finds Out It’s Actually Him