No, she hasn’t. This incorrect announcement was tweeted out by misinformed BBC reporter, Ahmen Khawaja. Despite being quickly deleted, the rumor began to spread like wildfire through social media.

After deleting the tweet, Khawaja tweeted several more messages conveying that it was a silly prank and a huge mistake. 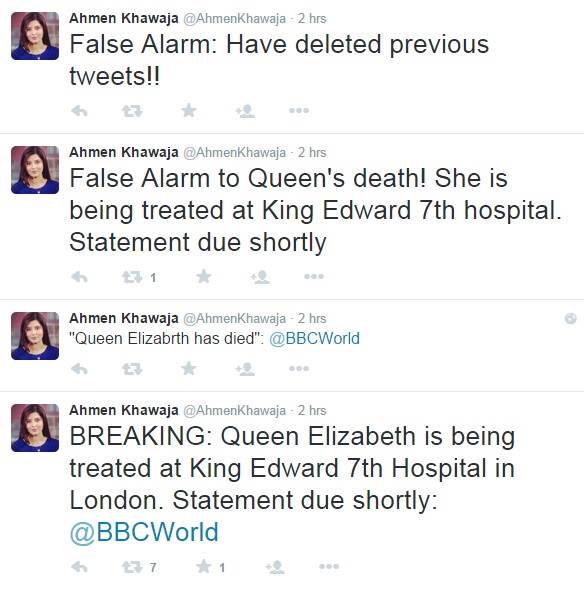 Major media outlets, such as CNN Newswire, picked up the news that quickly turned out to be false. It was NBC that contacted Buckingham Palace for details, when they were told no one had died. In fact, the 89-year-old monarch is still alive and participating in social activities. It seems the rumor of Queen Elizabeth death stemmed from her recent visit to the hospital for a scheduled checkup.

It turns out that BBC was practicing an internal drill for the inevitable day that Queen Elizabeth does pass away.

“During a technical rehearsal for an obituary, tweets were mistakenly sent from the account of a BBC journalist … The tweets were swiftly deleted and we apologize for any offence”

The rumor came at perfect timing, Queen Elizabeth had just been seen visiting the hospital for a checkup, according to Buckingham Palace.