Joseph Robinette “Beau” Biden III, eldest son to VPOTUS Joe Biden, a promising rising star in their political dynasty, passed away this Saturday after his immense battle with brain cancer for so many years. 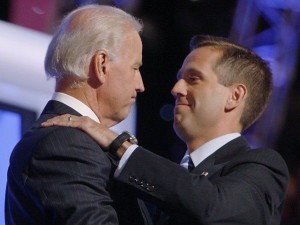 Beau Biden, 46, was diagnosed with Brain Cancer in August 2013, and sent into remission two months after. However, it came back on May 2015. Beau was admitted to Walter Reed National Military Medical Center in Washington recently to fight his cancer, a disease that his father chose to keep private in the last few weeks of his son’s life.

Throughout his political career, Joe Biden has dealt with pain in loss in ways that most of us can only imagine, but it his strength and his will to keep going that inspires us to do the same. We often know him a one of the most easy-going, cheerful politicians America has known, eating ice cream, enjoying street-side snacks with the President, and flattering grandmoms. However, that cheerfulness and laid-back take on life also has a source that runs very deep.

When you think of what Joe Biden’s endured and what he’s like, he seems to get something right about life that most of us don’t.

In 1972, barely a week after Joe Biden was elected into the Senate, the 29-year-old father and his family were hit by a terrible car crash against a tractor trailer. They had been out Christmas shopping at the time, and his sons were immediately rushed to the hospital. with the heavy concussions, the bone fractures on their hips and extremities, the doctors weren’t sure if they would survive, and there may even be a risk of brain damage.

The doctors had to break the news to Joe: they had lost Neilia, his wife, and their baby.

Joe Biden did everything he could to make sure his boys would stay alive. He personally assisted the nurses to care for his boys — IV drips, wetting clean cloth, lifting beds.

It was said that Biden began to harbor suicidal thoughts, that it would be such an easy way out. But it was his boys that kept him going. He had almost resigned his seat in the Senate before being sworn into office, but because of his strength and his love for his children, he did end up taking the oath of office — right beside his son Beau’s hospital bed.

Biden took his 1973 Senate oath at the bedside of his children who were injured in crash that killed his wife. pic.twitter.com/DDqwcucsD9

In 2012, Joe Biden ofered a speech to the greiving families of fallen soldiers. He speaks about grief, drawing from a deep well of motion and widom within him:

He does not say that grief ever really goes away, or that it ends with a happy ending. Instead he offers this:

“There will come a day – I promise you, and your parents as well – when the thought of your son or daughter, or your husband or wife, brings a smile to your lips before it brings a tear to your eye. It will happen.”

Happy Birthday to the best coach I could have asked for. Love you Pop. #TBT pic.twitter.com/LPf2QxuE9h

We at Social News Daily offer our sincere condolences to the Vice President of the United States and his family.