About a hundred random bystanders did the nigh-impossible and lifted a doubledecker bus in a unified effort to save a unicyclist’s life at Walthamstow, east London, Thursday.

The unicyclist, 55, was hit by a large vehicle, a 212 bus, and slipped under the bus before 6:00 pm. People walking to and from their destinations, restaurant diners, and other random folk saw it happen, and without question rushed to the injured person’s aid. He was rushed to a hospital and is currently recuperating. His life was in the jaws of complete danger, and might have turned for the worse, if not for the heroic efforts of the locals that day.

Eyewitness Kyra Sam was walking to Wathamstow market that afternoon when she heard screams coming from the scene of the accident. “I’m really amazed at the strength of Walthamstow – no-one hesitated to push the bus off. I was in shock,” she says.  “Everyone really came together to help. It was really nice to see that in the face of something so awful.”

Sami Ullah, the owner of Director’s Cut cafe, located right across the scene of the accident, recounts the events from his perspective: “I was standing at the till and heard a loud noise. It was a big bang – we thought it was a shotgun or something. All of a sudden we saw people leaving their chairs at Turtle Bay and Pizza Express and running towards the road. We saw people actually coming out of the bus as well. Everybody was shouting and screaming.”

“Then all of the people tried to somehow move the bus a little bit. There were so many people gathered there, there must have been about 50 to 100. They somehow managed to pull the bus away a bit. We were amazed – it was a heavy bus, a double decker. Police were here straightaway and they took over.”

He added: “I saw the [victim] earlier – he was wheeling in the main square. He comes in quite often.” 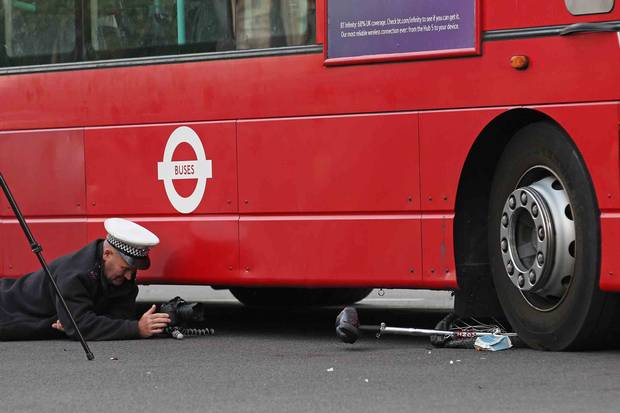 The bus driver, who stopped at the crash, has not yet been arrested. Scotland Yard has closed off the road or investigation and has advised motorists to avoid in the meantime.