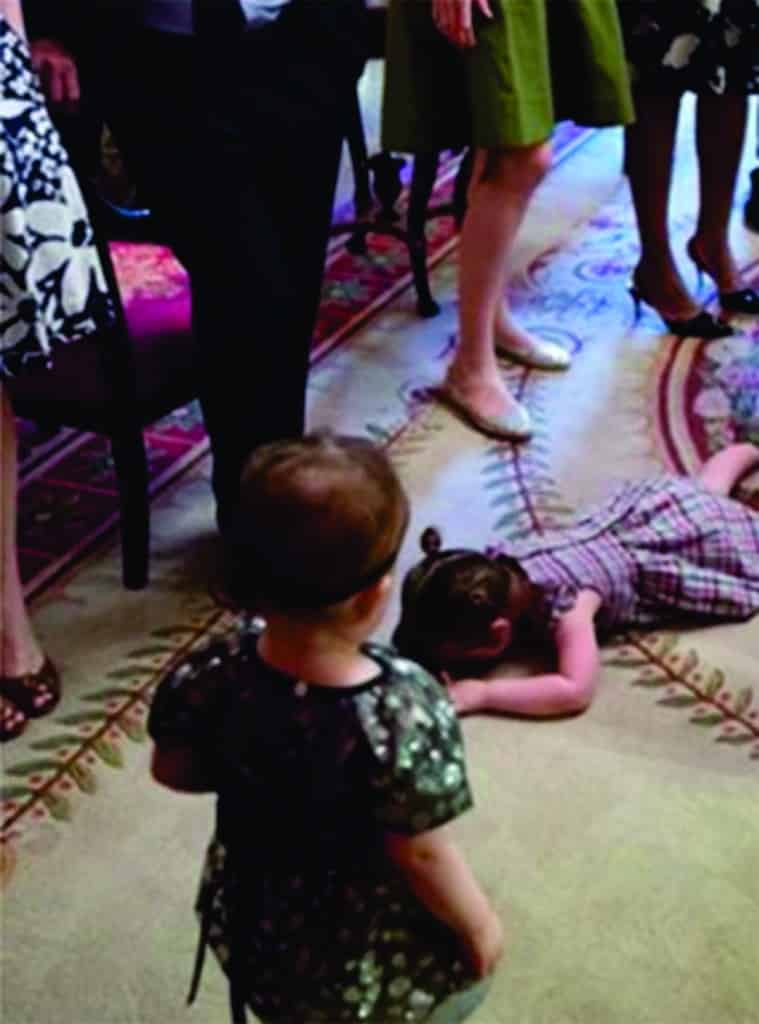 It wasn’t just any tantrum. It was a White House tantrum.

The Moser family was visiting the White House for Passover Seder. The Jewish family met President Obama and First Lady Michelle Obama in the Red Room of the White House and that’s where it went down. Literally.

The little Moser, Claudia decided to throw a big time fit. The two-year-old little girl even threw herself on the floor and began screaming. The moment was captured by an official White House photographer in a photograph that will forever haunt little Miss Claudia. The image shows President Obama with his arms outstretched in defeat, while Michelle smiles at the child. As the parents to two daughters, the presidential couple is no stranger to tantrums, especially a White House tantrum.

Any parent can relate to the Moser’s pain. Any normal parent has an arsenal of mortifying moments, times that cause any decent parent to rethink all of their life choices. It is like an unwritten rule of childhood, throw a fit at the most inopportune times and places. The grocery store. Church. The White House? It seems Claudia hit the tantrum jackpot…

Fortunately, the Moser family has a sense of humor and took to Twitter to make light of the situation, like Claudia’s uncle, who just happens to be New York Times columnist, Benjamin Moser.

Even, Claudia’s mother was able to make the best of it. Looking on the bright side, this would make a great story for a unsuspecting prom date or a wedding toast…

My daughter is an Internet meme! pic.twitter.com/eiuMMejkGs

Obviously, the photo has gone viral. Just as Mrs. Moser said, it has inspired many memes. It even inspired a Reddit Photoshop Battle and the entries are pretty creative. Thanks Obama.

Most of the entries manipulate what President Obama is doing.

Maybe Obama has superpowers. Those magic rays could come in handy with handling ISIS.

Maybe Claudia has a few issues. Hey, meeting the president is pretty stressful. Perhaps, President Obama just wanted to make a perfect batch of brownies for his guests. It just polite to have something baking.

Some changed the president into a more widely liked character. It doesn’t matter if you are Republican or Democrat, everyone can relate to the man in the yellow hat. Curious George is the most American of all monkeys.

Other participants changed the picture completely, like this one of President Obama golfing.

With all of these great creations, we wonder what President Obama has to say. No comment from the leader of the free world just yet, even though he now is a proud user of Twitter.

Also, let’s not forget this isn’t the first time a child has had a meltdown at the White House. Back in June, a retiring Secret Service agent and his wife were visiting with the president, when their child decided he had enough.

Apparently, Obama isn’t good company. Or maybe the White House is just really boring. This one kid was so bored, he started examining the fake fruit.

So, let this be a lesson. Bring something to entertain you if you plan to meet the president. Just sayin’

Together with the fireworks for the Independence Day weekend, the latest explosive Hollywood news involves no one else but the controversial Kanye West. The famous celebrity has revealed his plans for a presidential run. Originally planned for 2024, he has stated that he is actually going to run for the 2020 Presidential elections in November. The… END_OF_DOCUMENT_TOKEN_TO_BE_REPLACED

Recent trends have reported that K-pop fans in the US are getting mixed in with current issues in politics. K-pop fan communities are using online platforms to rally up and protest against racism in the United States. In support of the #BlackLivesMatter movement, the online K-pop community has come together in protest. Never has it… END_OF_DOCUMENT_TOKEN_TO_BE_REPLACED