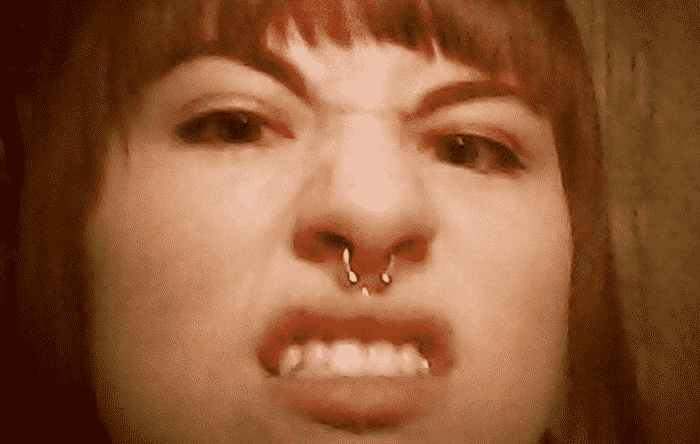 Selfie trends have come and gone — from the infamous duckface to the selfie olympics — but this one particular trend has got Russian women fighting for their rights. As a matter of fact, they’re dominating Instagram with heir very own “wrinkle selfies” as protest to an eyebrow-raising statement an official said a week ago.

It all started with the marriage of Kheda Goylabiyeva, a seventeen-year-old girl to Chief of Police Nazhud Guchigov — a man 50 years her senior. On top of that, Goylabiyeva is Guchigov’s second wife.

Although the legal marrying age in Chechnya is 16, it is 18 in Russia, and with that, controversy ran rampant.

She is the Bride! Just 17 years old and the groom is #KhedaGoylabiyeva 57 years old police chief in Chechen! pic.twitter.com/umHdl8KxmE

But that’s not the end of it: when Pavel Astakhov, 48, the ombudsman for Russian’s Children’s Rights, had his say on the matter, it didn’t go down too well: “Let’s not be prudish. Emancipation and sexual maturity happen earlier in the Caucasus. There are places where women have wrinkles at age 27 and they look 50 by our standards.”

The ladies of Russia are having absolutely none of it, and they’re taking the fight to Instagram. The Cyrillic hashtag translates to “wrinkled woman” or  “withered woman”, and follows the lead of journalist and activist  Bella Rapoport. It’s garnered over 500 posts in the last week, and is not showing any signs of stopping.

Эк меня в Нью-Йорке сморщило-то! #астаховавотставку #сморщеннаяженщина // Russia’s Children’s right commissioner Pavel Astakhov has recently defended a Chechen head of police who married (presumably by force) a 17 year old girl by saying: “Nobody knows anymore, in some places 27 year olds are all wrinkled up”. Well, I’m 28 and happy to follow @discosalmon ‘s lead in mocking this vile absurdity. A photo posted by Katya Kazbek (@katyakazbek) on May 15, 2015 at 9:01am PDT

An online petition to eject Astakhov from the ombudsman seat has reached 35,000 signatures and continues to grow. He has recently released a statement of apology, which goes:

“Women of any age are splendid and adorable. God created Woman so that we could love her, defend her, take care of her, glorify her. A clumsy comparison, a rash word taken out of the context of discourse, cannot change my attitude to the Fair Sex. I’ve loved, love and shall love and respect [them]! I apologise for the mistake I’ve made!”

With such an apology, the women of Instagram aren’t entirely convinced. The protest selfies squint on.

The Michelle Obama Podcast was released on the 29th of July and can be streamed on Spotify, both for free and premium users. The world is currently hyped that the Former First Lady of the United States has released the first episode of her latest podcast. What made listeners even more excited was when she… END_OF_DOCUMENT_TOKEN_TO_BE_REPLACED

Research in Britain has deduced that there are a total of six “general” classifications of COVID-19 symptoms. The research, originally published in June of 2020, has revealed that the symptoms of COVID-19 can be generalized into six different categories. This is based on the data collected from a symptom tracking app. It has been widely proven… END_OF_DOCUMENT_TOKEN_TO_BE_REPLACED