And now, here’s your Friday dose of Cute:

A sweet-faced polar bear cub was keen to explore a boat full of wildlife watchers, just as much as it did exploring the camera lens attached to the prow.

Kyriakos Kaziras, a professional wildlife photographer, was out in the water with his colleagues when the curious cub puttered onto the ice and began clambering up the side of the boat near Barter Island, Alaska. 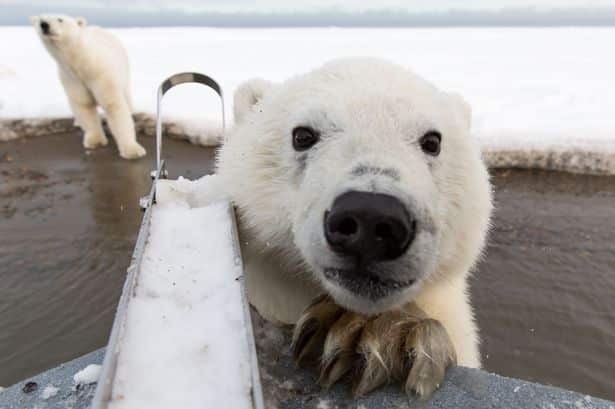 The cub was out for a stroll with its mother and brother, no doubt warming up and catching what little sunlight there was to be had. However, a boatload of humans just proved to be too much of a temptation for the wee thing, and as they say, the rest is photography. 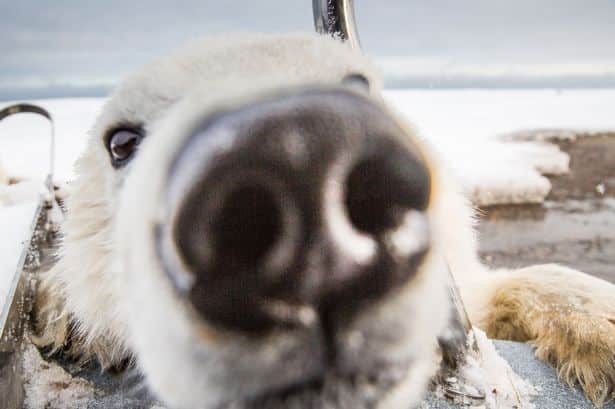 Kaziras and his team had been observing the family of polar bears for more than a fortnight, and had noticed that the mother and cubs felt generally safe around the boat, coming out every now and then to take a look and observe any activity going on.

After lolling around on the Beaufort Sea, his team decided it was time to lift anchor and sail for other icy shores. The curious cub was determined not to be left behind. Kazarias shares: “After three weeks, on the day of our departure, the most curious cub approached the boat, tried to climb it, and started to play with us. When we left, he didn’t want to leave us and try to jump on the boat to come with us.” Aaaaw.

Wildlife Photographers have one of the most interesting jobs ever. Their work entails coming face-to-face in hair-raising closeness with their subjects, utilizing infinite amounts of patience, weather conditions, cramped spaces, nerves of steel and sometimes unbelievable running skills to save life, limb, equipment, and shots. However, the rewards are absolutely worth it.

You may also enjoy:
Quokka Selfies Make Waves in Australia