Most folks know that big things can certainly come in small packages — this one particularly angry squirrel is certainly no exception, as one unlucky New York rail worker soon finds out.

The train operator, 24, was walking down a flight of stairs in the Woodlawn subway station in Norwood when disaster struck. She is currently employed by the Metropolitan Transport Authority, and is stationed at The Bronx, New York. The Bronx is certainly well known for its tough community, but it seems that even its fauna has taken on a similar attitude.

She was allegedly shooing away a group of squirrels at around 4:30pm. However, one had had enough of humans pushing them around, and went for the rail worker’s finger. 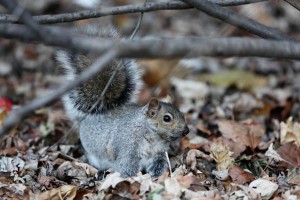 Though most people may shudder to think about the notion of a potentially rabid squirrel sinking its tiny, sharp incisors into tender human flesh, Medical experts are more than glad to debunk that idea. Most small mammals, such as rats, mice, hamsters, guinea pigs, gerbils, chipmunks, rabbits, hares (and yes, squirrels) are almost never found infected with rabies, and have never been known to cause rabies in other animals and humans. The worst things that could happen in relation to a squirrel bit would be potential torn tendons, skin and muscle lacerations, and most certainly, the pain that comes with it.

The enraged squirrel’s wherabouts are unknown. However, what exactly could its reasons be for attacking the train operator?

a number of cheeky comuters opined that it was finally getting even for the frustrating train delays. BigHomie Stax tweets: “that squirrel was holding it down for all the passengers affected by train delays.”