Why Shredded Wheat Is The Most Hated Brand On Social...

Brands and companies have begun a social media war. It is a battle to get the most likes, the most interactions and hopefully, the most positive feedback. This online interaction could result in huge financial gains for these companies. According to CNBC, a new study is taking a look at who’s winning and who’s losing. Spoiler alert: Shredded mini-wheats are the most hated brand on social media.

Brandwatch, a social media analytics company, is behind the tracking of the social media efforts of 50 of the largest restaurant, food and beverage brands. So, how do they record such daunting data? Brandwatch pulls any mention of the brands from Facebook and Twitter. They then use this data to rate the visibility, responsiveness and whether the sentiment was negative or positive. Many brands believe that social media success is directly related to higher profits, but this isn’t always the case.

The data discovered that the more mentions a brand has, the more negative the comments were. For example, fast food restaurants like Taco Bell are highly talked about, but they rank very low in sentiment scores. 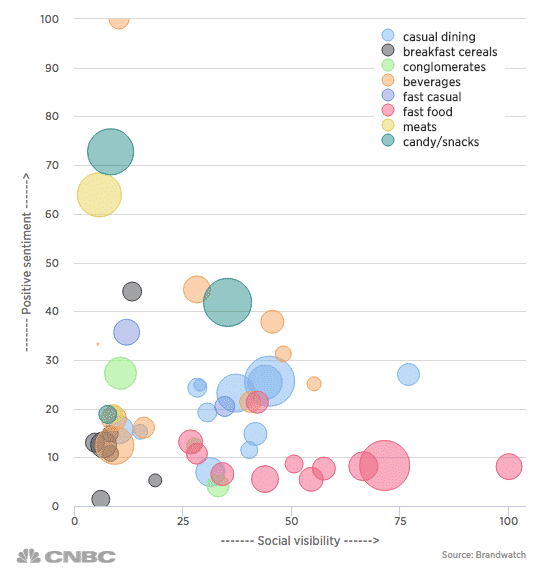 On the other hand, some brands get very positive mentions, but only from a few people.

In fact, the data discovers that it is extremely rare for a company to have lots of mentions and extremely positive sentiments. One company that has been an exception to the rule is Coca-cola. However, it is easy to be an exception when you are the fourth most valuable company in the world. According to Forbes, Coca-cola is worth $56 billion and brings in $23.1 billion in revenue each year. It ranks up there with tech giants, such as Apple, Microsoft and Google. A glance at the beverage giant’s budget reveals that they spend about $3.5 billion on advertising. While social media is a relatively cheap form of advertising, companies have to pay a social media team to interact with consumers online.

The research went on to prove this concept further by using the Shredded Mini-wheats cereal brand. The brand’s Facebook is relatively under utilized and the few negative mentions it receives gives it a bad rating.

The low social volume allows the few negative comments to sway the brand’s sentiment. Brandwatch content researcher, James Lovejoy says that if a company is interacting with their consumers then it will help the companies’ image.

“Social engagement is also the metric that best predicts a company’s overall social score in the Brandwatch index,” said Lovejoy. “In 2015, companies have to care a great deal about their overall social media presence because social media is the public’s go-to forum for praising or cutting down products, services and brands. Having a high social engagement or positive sentiment from consumers can definitely affect a company’s bottom line.”

Interestingly enough, company’s profits may be boosted by more social media engagement. This doesn’t necessarily mean that the comments from consumers is positive. Maybe the saying, any publicity is good publicity. Getting their image out there and getting consumers talking can help a brand become the forerunning in its’ industry.

“We strive to achieve exceptional customer service and our customers have come to learn that they can use our social media platforms to reach out to us with a concern,” said McIntyre in an email. “In this case at least, we view the negative to be a bit of a positive.”