By the constitution of sass and class, this queen reigneth supreme.

This weekend, SCOTUS Justice Ruth Bader Ginsburg presided over the wedding of two incredibly happy grooms, Shakespeare Theatre artistic director Michael Kahn and interior designer Charles Mitchem. It was a lovely wedding, with the grand, historic Anderson House as backdrop, and timeless hits like “Mr. Sandman” as music. To grooms slipped black-and-gold Harry Winston rings on each other’s fingers, and exchanged their vows as they had exchanged their hearts. 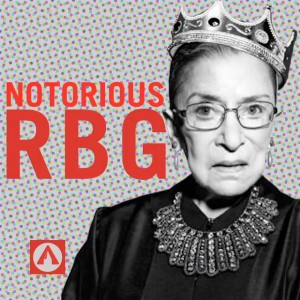 And that’s when the Notorious RBG decided to drop the bomb.

With a sly look to the audience,  Justice Ruth Bader Ginsburg cited, invoked and absolutely emphasized the word “Constitution”, she then pronounced the two men married by the power invested in her by the Constitution of the United States of America.

This happened just practically weeks after the Supreme Court heard arguments on the constitutionality of same-sex marriage bans in various states across the country. could Justice Ginsburg be hinting at the ultimate decision to be announced within the year?

The crowd went wild. The applause was thunderous, the couple kissed, the judge smiled, and for once, all was right with the world.

Justice Ruth Bader Ginsberg has long fought for the rights of women ever since the beginning of her career. She took a stand for women’s rights to birth control with the Hobby Lobby case, writing a 35-page dissent that delivered epic burns to anti-choice corporate magnates. This petite powerhouse of a woman is also presently fighting to constitutionalize same-sex marriage nationwide, with no exceptions.

We can only wait and see what the Supreme Court’s verdict will be this coming June. However, we can however delight in the fact that, after the ceremony, our Lady Justice doffed her iconic black robe and white collar to reveal a a glamorous cream leaf-motiffed jacket, all to the theme of “Breakfast at Tiffany’s”.