by Dan Evon 11 years ago2 months ago 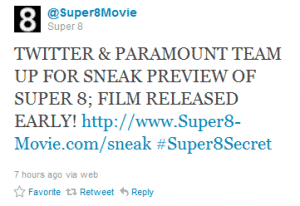 Fans of Spieldberg, Twitter, J.J. Abrams or the awesome preview can buy tickets to see the early premier. Paramount is directing people to #Super8Secret where they’ll find a link to buy tickets.

The sneak peak screening will be shown at 325 theaters around the county (some with free popcorn). Super 8 will have its official launch on June 10th, when it will be released on more than 3000 screens.

“Some have criticized us for keeping certain elements of the movie under wraps. Fortunately, we are in a position where we can afford to take risks that allow us to protect the surprises of the movie.”

If you like it, spread the word with #Super8Secret. You can get tickets here.