The popularity of social media means that even the most sensitive material can be made public… very quickly. Of course, Twitter is the go-to source for all things movie spoilers and sneak peeks. The latest look gives an inside view of the production of the much anticipated Suicide Squad. It seems one Twitter user got a little sneaky with their cell phone during filming of the newest DC feature film. The low quality footage shows some interaction of the Joker (Jared Leto) and Harley Quinn.

The photos didn’t only show the two main characters of the Suicide Squad arguing, but also revealed the Joker’s over-the-top choice of vehicle. Spoiler: it matches his hair.

Look like #suicidesquad is filming on the lakeshore between bay and front again. @olv pic.twitter.com/EfNeC8Gzlh

Other onlookers were quick to point out that the characters were obviously filming a flashback scene. Hence, the Joker did not have tattoos yet and Harley’s hair was still blonde.

Of course, as soon as these fan photos started to go viral, official set photos were released. 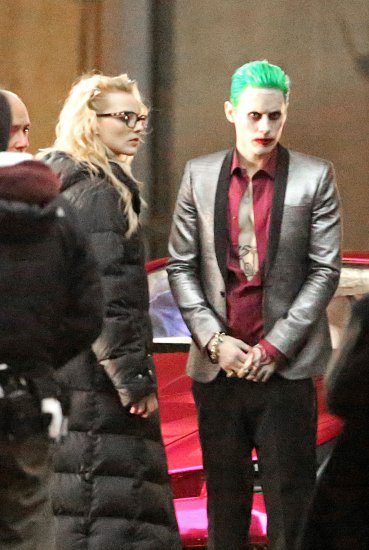 These photos are definitely better at conveying how awesome this movie is really going to be.