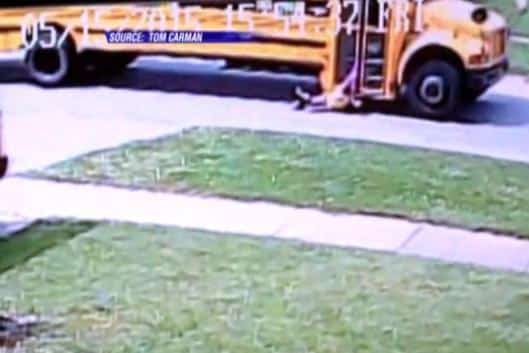 It was every parent’s nightmare in Louisville, Kentucky after a little girl was rushed to the hospital after being dragged down the street by an unsuspecting school bus driver.

The child, who is being described as a five or six-year-old, was getting off the bus when her backpack was snagged by the closing door. The driver then took off down the street, dragging the little girl about the distance of a football field.

Neighbors looked on with horror as the bus drove down the street. A security camera caught part of the incident, which shows a good samaritan coming to the rescue. A Camaro speeds down the road to catch up with driver to get his attention. Fortunately, the driver was able to alert the bus driver and get the bus stopped.

The owner of the security camera, Tom Carman, told a local news station that without the intervention of the Camero, “the bus driver may have just kept going.”

Onlookers rushed to the little girl’s aid. Surprisingly, she was still conscious. One onlooker said the child immediately asked for her mother. The girl was rushed to the hospital with non-life threatening injuries.

A witness told WLKY about the extent of her injuries and how the girl had”hardly any skin left” on her leg.

“Her shoes was off; her pants got ripped off. It was just horrible to see her like that on the ground,” Esther Burlison told WLKY.

The little girl’s babysitter, Brian Burlison, spoke out about the incident, saying the bus driver was being pretty irresponsible and “should have watched the girl walk up the driveway before she pulled off.”

The accident is under investigation. After the authorities arrived, students onboard the school bus were loaded into another bus. Onlookers say the bus driver was visibly distraught after the incident.

‘The Magic School Bus’ To Ride Again On Netflix

Presidential pardons are one and many in the history of the US. There are many times when US Presidents granted reprieves for their citizen’s misdeeds. The US President may grant a pardon for any individual, including himself, for any crimes done against the country and its citizens. This issue of Presidential pardons has been trending… END_OF_DOCUMENT_TOKEN_TO_BE_REPLACED

President Biden has tapped Rachel Levine to be his assistant secretary of health, making her the first publicly transgender federal official. In 2017, Democratic Gov. Tom Wolf appointed Levine to her current post, making her one of the few transgender persons serving in appointed or elected positions countrywide. Biden said in a statement: “Dr. Rachel… END_OF_DOCUMENT_TOKEN_TO_BE_REPLACED

The minimum wage hike has always been an issue in the US for the past decades. With only a few hours before Biden gets inaugurated as the President of the United States, people are excited for all his promises to take place. One of these is his plans to raise the minimum wage of workers… END_OF_DOCUMENT_TOKEN_TO_BE_REPLACED