Facebook Lobbying Employees To Switch From iOS To Android Smartphones

by James Kosur 10 years ago8 years ago

Earlier in the year we reported that Facebook was demanding that some of its employees switch over from iPhone based iOS devices to the Google Android platform for smartphone use. The idea behind the plan was simple, if more Facebook employees are using Android they will create a better mobile app that isn’t sub-part.

Now in an effort to further its smartphone push the world’s largest social network has started plastering its headquarters with posters that read “switch today” and then ask employees to contact helpdesk@fb.com in order to receive a shiny new Google Android based smartphone.

First spotted by TechCrunch, a Facebook spokesperson confirmed the company had “more iPhones deployed” than Android handsets. The company does admit that awareness towards Android smartphones however is on the rise.

Facebook has made some Android advances, including a new “rage shake” bug reporting feature that has been made available to Facebook employees for the purpose of testing the Facebook and Facebook Messenger Android Apps. The program works by sending bug reports when an FB employee “violently shakes” their smartphone.

The “rage shake” option might sound silly but Facebook is claiming that it has drastically increased the number of mobile bug reports.

Here is an example of the posters now strewn across the Facebook headquarters: 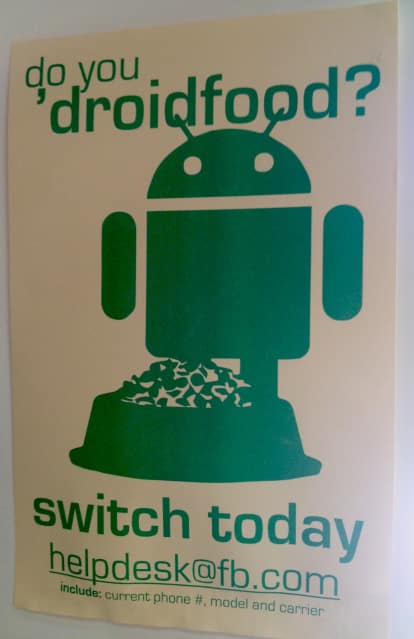