These Millipedes Glow in the Dark When Stressed Out

We all exhibit certain behaviors when stressed out or nervous. Some people bite their fingernails. Some people have a penchant for pacing back and forth. Other people reach for crutches, like booze and drugs. But the insect kingdom has produced some very interesting reactions to stress that perhaps we humans could learn a little bit from. Instead of running ourselves rampant or climbing up the walls, maybe we can try to be like the millipede Motyxia sequoiae. Maybe we can all learn to just glow when we are stressed, that way people know to avoid us if we are glowing blue. There’s more science to it just below the surface.

What is actually happening to make this millipede glow in the dark is a very complex chemical reaction within their bodies which essentially lets predators know that there is some serious poison on their body (cyanide) and if any predator of any sort thinks about ingesting it, they are in for a toxic treat they will not soon forget.

What makes these glow in the dark millipedes even more interesting is how location factors into their luminescence. This species is found primarily in the upper elevations of the Sierra Nevada actually have about 11 variations, and though each one does indeed contain cyanide that makes them glow blue/green when they sense danger, the lower you go in elevation, the less they glows. While that in itself may not be too remarkable, when you put the bigger picture together you realize you are witnessing evolution at its most divine. 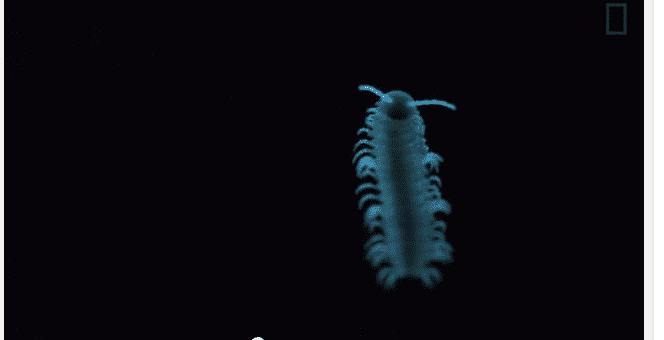 So why do the millipedes at higher elevations glow when the ones lower do not seem to radiate as brightly? Scientists believe these insects started out in the lower, dry climate, and slowly moved up the mountain. As they did this, the ones higher up would glow brighter as an indicator or warning to those lower in the mountain of dangers in that particular area. So ultimately what is happening is communication among the species living on the different areas of the mountain. The millipedes that see many glowing kin higher up the mountain know that is an unsafe area and tend to stay closer the the ground at that point. Much in the same way we would text a friend to warn them if a party sucks before they show up, seems this breed of millipede was WAY ahead of us in that area.

Speaking of the marvels of nature….