Trinut Is Latest Twist on the Donut

A few years back, the world was taken over by storm by a humble creation out of Dominique Ansel’s bakery: the Cronut. Sweet and crispy on the outside, deliciously fluffy and delicately layered on the inside, the Cronut had New Yorkers and Parisiennes alike lining up in the wee hours of the morning to get a taste of the highly-sought-after pastry.

This 2015, however, British baker Christopher Freeman may have just invented a whole new twist on the classic treat that could turn coffee shops and donut shacks on their heads.

Say hello to the Trinut, a donut kitted out with three holes instead of just one. This version is said to be the answer to many a donut-lover’s complaint of losing their grip on the pastry, traditional ringed or filled, well into the last few bites.

“It came out top in all consumer-testing panels,” Freeman says. “It’s designed so people can easily fit their fingers in the holes, allowing them to eat round the doughnut and then savour the last piece without it falling out of their hands.”

The Trinut made its debut in London on National Donut Day, and proved to be a big hit with the public. Should the success enjoyed at the Trinut’s grand launch become a consistent thing, Freeman hopes to see his Trinut well-placed in many bakeries and cafes across Britain. 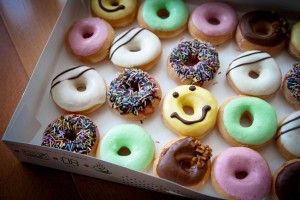 Ansel’s Cronut took two months for the recipe to be perfected. However, Freeman boasts of having spent two years to fine-tune the Trinut’s recipe, and he’s pretty confident it’s now as good as its ever going to get.

Freeman is also so passionate about donuts, he himself founded National Donut Week back in 1991. This week-long holiday was founded as a way to raise funds for the National Children’s Trust. It’s one sweet way to certainly spread the love and eats around!