Harman Singh, 22, was when he suddenly heard the screeching of automobiles and a loud hubbub happening outside his home along Manuroa Road in Takanini, Auckland, New Zealand. He went out to investigate, and found a young boy bleeding on the road, sorely in need of medical attention.

Singh didn’t think twice, and took of his turban and used it as a cushion to stop the bleeding.

“I saw a child down on the ground and a lady was holding him. His head was bleeding, so I unveiled my turban and put it under his head,” he shared with the New Zealand Herald. “I wasn’t thinking about the turban. I was thinking about the accident and I just thought, ‘He needs something on his head because he’s bleeding’. That’s my job — to help. And I think anyone else would have done the same as me.” 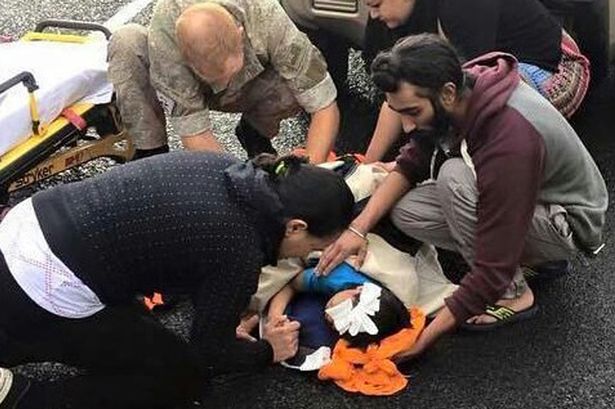 It’s important to note that the wearing of the turban, or the daastar, in the Sikh faith is of utmost religious importance importance. Gaga Dhillon, a bystander, relates Singh’s act of compassion from this perspective: “There was enough help as there was, but being a Sikh myself, I know what type of respect the turban has. people just don’t take it off – people die over it. I saw him (Harman Singh) with no head covering and thought, ‘That’s strange’. But then I saw one hand was underneath the boy’s head supporting it and his siropao (turban) was stopping the bleeding.

He adds, “He didn’t care that his head was uncovered in public. He just wanted to help this little boy.”

Daejon Pahia, the young boy, was walking to school with his sister when he was hit by a vehicle. His mother, Shiralee, soon arrived on the scene, and mother and son burst into tears upon seeing each other.

Singh and other members of the public stayed with the pair until an ambulance arrived. the paramedics assured them Daejon would be okay.

The boy suffered a fractured skull, a lacerated kidney and 12 deep head wounds. He is now recuperating in a stable condition after surgery at Starship Hospital in Grafton, Auckland.

Despite Singh’s break from religious protocol, he is hailed as a hero by the Indian community, and received thousands of messages and cheers from on Twitter and Facebook.

Singh, a Business student in Auckland, is as modest as he is selfless. “Thousands of people have said ‘well done’. I was only doing what I had to and trying to be a decent member of the community,” he said. “Thanks to all who messages, calls … thanks all the worldwide Facebook members who messaged me. I think I just did my job, nothing else.”