This man certainly nose a lot about cheese.

Nigel Pooley, 69, has been sniffing and nibbling different kinds of cheeses for a living, working as cheese expert at Wyke Farms, one of the biggest dairy product manufacturers in Britain. His finely-tuned sense of smell has helped him determine when a particular type of cheese has already hit its prime for the past 18 years. Thanks to the nose that knows, he has helped successfully turn out more than 12,000 tonnes of cheese every year, to be enjoyed by the public and the company earning a goodly sum of eighty million pounds.

With such numbers and years of experience behind him, it’s no wonder that Pooley has decided to insure his nose for twenty-five million pounds a year. 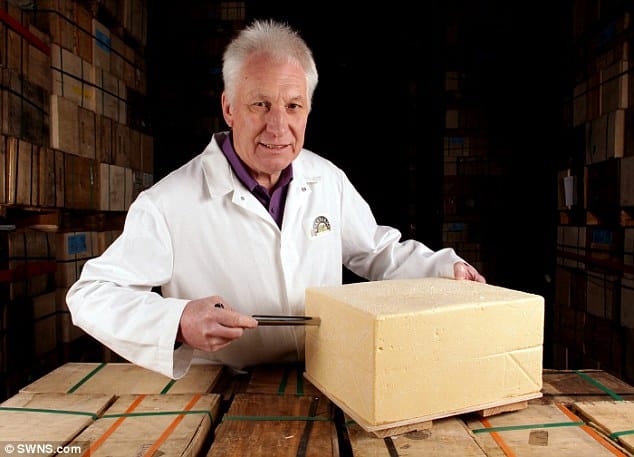 Wykes Farm is proud to have him on board, and says he is an invaluable asset to the company.

“As cheese is maturing it’s flavour hasn’t fully developed, so you can’t taste what it is going to be like in 12 months time,” A spokesman explained. “However, the aroma that Nigel’s highly trained nose can pick up will tell you what the cheese will mature into and what taste will develop. His nose can pick up flavours at one month old that will develop in up to 12 months time.”

“It helps us to select only the very best cheese for the Wyke Farms brand that we can be sure will turn into the finest Vintage cheddar. It would cost a lot of money to store a cheese for a year, so we need to be sure that it will develop the very best rounded, sweet and nutty flavour with a hint of bite at the end. Only a highly trained nose like Nigel’s can pick this up.”

This isn’t the first time Pooley’s insured his prized nose. The first time was in 2009 at a cool five million pounds.

Pooley, a grandfather to three grandkids, is not only is an avid cheese sniffer, but is also a hearty cheese eater. His job has him tasting as much as half a kilo of cheese a day, checking for fat content, acidity, and alkalinity — and he says it’s what keeps him fit as a fiddle.