A little human kindness makes every meal a feast.

Clarence Blackmon, 81, had just come back from the hospital after months of chemotherapy and other treatments for his cancer. He came home to see an empty refrigerator, with absolutely nothing to eat — and he was hungry. Frail, alone in his home in Fayetteville, California, and not knowing anyone else to turn to, he called 911 for help.

“I said, ‘I’m not broken, I’m not bleeding, and I’m not in crisis. I just want somebody to help me buy some food,'” Blackmon shared with ABC News. 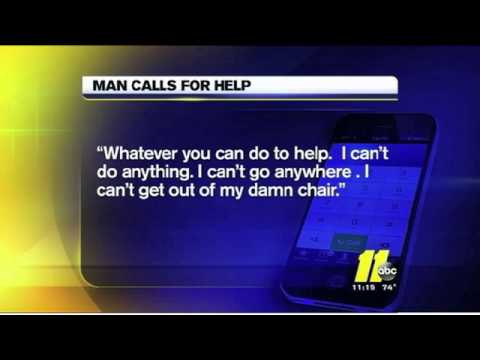 Blackmon’s plea for help struck a chord in the heart of Marilyn Hinson, 911 responder. She instantly knew what she had to do.

“He was hungry,” Hinson expressed. “I’ve been hungry. A lot of people can’t say that, but I can, and I can’t stand for anyone to be hungry.”

An hour and a half later, Blackmon responded to a knock on the door and opened up. There stood Hinson and two other police offices, arms full with groceries bags and all of Blackmon’s favorites: fresh cabbage, popcorn, green beans, pickled beets, and pepsi. Hinson stayed behind and struck up a lively conversation with Blackmon as she proceeded to make him a couple of ham sandwiches. She also left him her phone number and told him to call her up anytime should he need any kind of assistance.

“I was overwhelmed!” says Blackmon, fighting the tears in his eyes.

A year and a half ago, Blackmon suffered a stroke and was rushed to the hospital, thanks to the quick response of the 911 operators. since then, he has spent six months in a rehabilitation facility, and is currently battling his own cancer.

“She is such a delightful lady,” Blackmon says wistfully of Hinson and her extraordinary kindness. “It’s amazing. Us little people need a helping hand every once in a while. Most of the time, we get overlooked. We’re still here.”