Reddit Gave Users A Chance To Hassle The Hoff [ICYMI]

Don’t hassle the Hoff… unless you are taking part of a Reddit AMA.

If you want to hassel the Hoff the time is now! Live! @reddit @reddit_AMA https://t.co/flXb3L4dQ2 pic.twitter.com/8QZvmfOICf

David Hasselhoff took some time out and hosted an AMA session on Friday evening. As most celebrities that participate in these Reddit sessions, Hasselhoff had ulterior motives. He has recently released his latest single, “True Survivor.”

With almost a million views, the song is the main track from the film, Kung Fury. The film is a viral short film that is now being made into a full-length feature film. The film is pretty interesting, it is described as an action comedy that was inspired by 80’s cop movies. The producers of the film have started a Kickstarter campaign to fund the making of Kung Fury.

Of course, people wanted to know why the Hoff would want to be involved with such a strange project, such as Kung Fury. As usual, David had a tremendous answer. 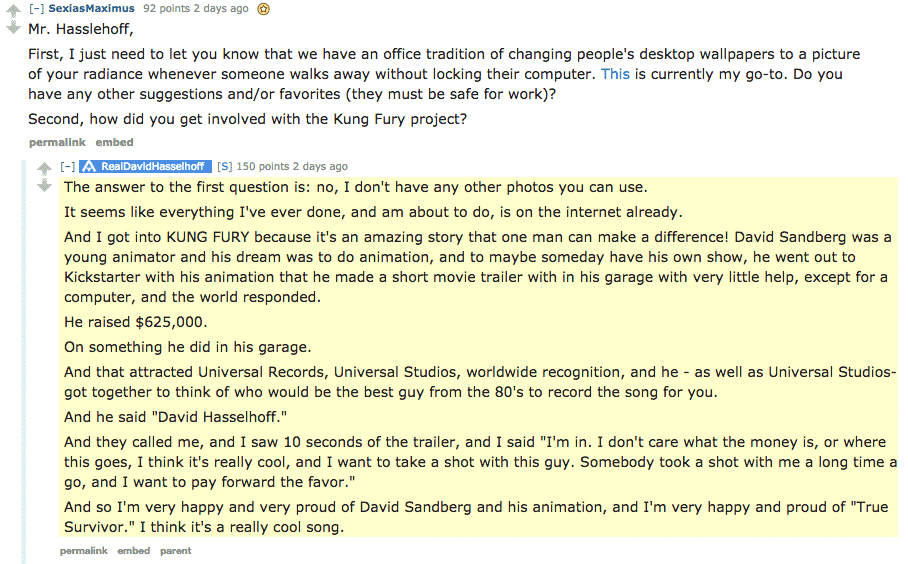 After watching the Kung Fury trailer, someone asked the question we were all wondering. How did they get Hasselhoff’s hair so… perfect.

Of course, Hasselhoff will always be remembered best for his role on the 90’s hit TV series, Baywatch. So, of course, there were plenty of questions about that.

A seemingly basic question about David’s favorite episode of Baywatch turned into a pretty emotional conversation. 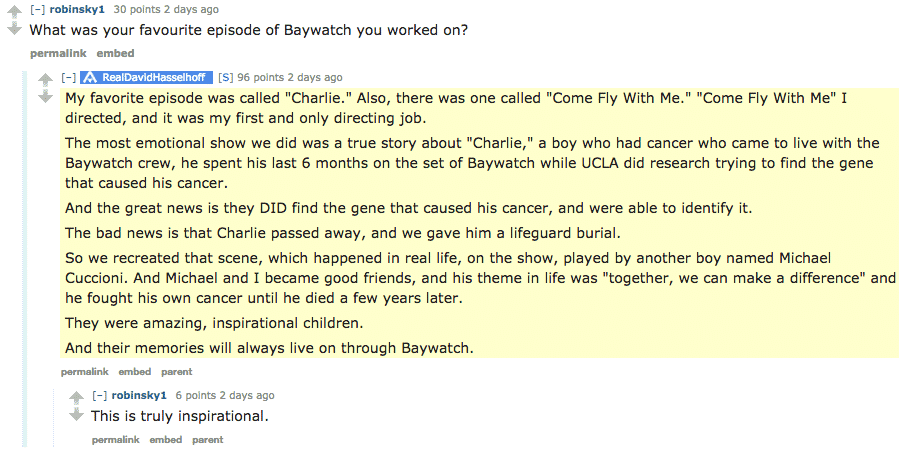 After Baywatch, Hasselhoff is best known for his role in the movie, Knight Rider. One fan took the time to thank him for his iconic role as Michael Knight.

Another user asked the question that we all wanted to know about the production of Knight Rider.

Another Hasselhoff moment that will live in infamy is the day he sang on New Year’s Eve for the reunification of Germany in 1989. On top of a crane and the Berlin wall, he sang and became a symbol of peace for the people struggling in Germany. As the years have went on, people have shared the rumor that David believed he played a big part in the peacemaking process. He said that couldn’t be farther from the truth.

It’s no surprise that Hasselhoff has a very large fan base and well, major fans will do just about anything to get their idol’s attention. David shared a bit about his most bizarre encounters with fans.

Speaking of fans, it’s no secret that the Hoff has found even more success in Europe, but his fans over in the United States wanted to know when they would get some of the Hoff’s lovin’.

With all of the answering of selfish fan’s questions, one user just wanted to know how Hasselhoff was doing.

Then, there were some people that weren’t exactly fans of the Hoff.

There was one question that seemed to really get redditors riled up. As you know, reddit users love a good pun on words and no one knows that more than the Hoff, the Hoffman, Hasselhoff, the Hoffmeister… You get the idea.

It seems as if David Hasselhoff was one of the more popular Reddit AMA sessions. More than 2000 questions were asked and Hasselhoff answered tons of them, more than most AMA participants. From heartwrenching to hilarious, the Hoff didn’t hold back. He was able to answer serious questions, make fun of himself when needed and admit to some pretty crazy stuff. The session gave fans a real look at what makes Hasselhoff the Hoff.

We’ll leave you with this gem that somone dug up during the session. Meet Mr. Lean Pockets.

Hey McDonalds, Who Took A Dump In My Happy Meal? [Photo]