President Barack Obama’s legacy is socially-aware and socially-focused. His steps towards establishing positive change and full acknowledgement of women’s rights, equality, and LGBTQA right have been ground-breaking and unprecendented, never before seen in the history of the USA — and he’s not through just yet. He issued a statement on Thursday that said gender identity should never be a hindrance to adopting or becoming a foster parent. 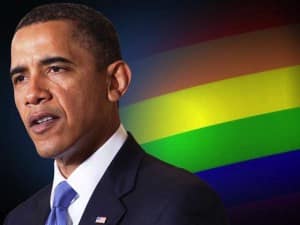 “With so many children waiting for loving homes, it is important to ensure all qualified caregivers have the opportunity to serve as foster or adoptive parents, regardless of race, religion, sexual orientation, gender identity, or marital status,” President Obama wrote in a proclamation that went public Thursday. The historic response from the White house is one of the strongest stances of support for the LGBTQA community, just two weeks after a number of Florida officials debated whether it was legal for some agencies to ban LGBTQA couples from becoming foster care parents.

Back in 2009, the POTUS issued an official proclamation that his administration supported “adoption rights” for LGBTQA Americans. His most recent step further strengthens this statement, and is keen to hone in on gender identity. 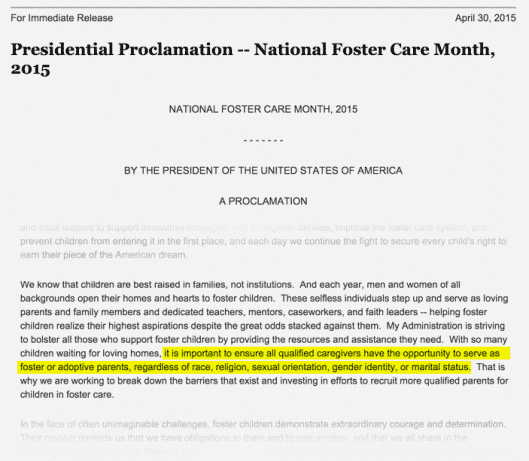 This statement has rubbed a number of states uncomfortably, with Mississippi, Alabama, Louisiana, Texas, and Nebraska just to name a few. However, Obama is determined to make adoption rights for transgender people a reality in all states of America.

He has also begun taking solid steps towards eradicating “conversion therapy” sites for LGBTQA people, and is in a very firm stance on the protection of LGBTQA youth.

“All young people, regardless of what they look like, which religion they follow, who they love, or the gender they identify with, deserve the chance to dream and grow in a loving, permanent home,” he said.