Oh, Hamburglar, you naughty, naughty boy. Once upon a time in McDonaldland, we knew you as this chubby-faced bumbling ginger-headed boy with a mind as singular as your tooth. And now? We’ll let you #RobbleRobble us if you let us #RobbleRobble you. 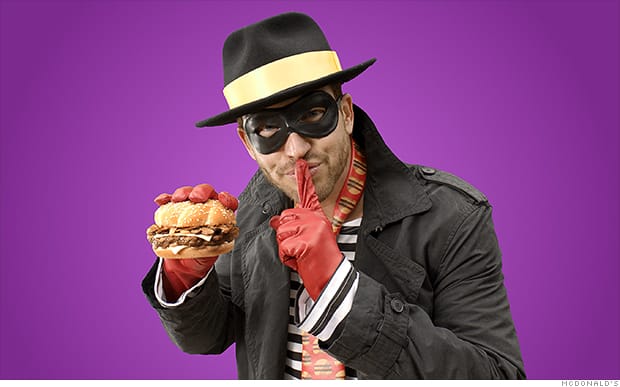 After thirteen years of silence, McDonald’s is finally bringing back the Hamburglar, and even giving a reveal of what he’s been up to all these years. It seems he’s settled down to a quiet surburban life of minivans, picket fences, and backyards. He’s even raised a family, and has two kids marveling at his burger-flipping prowess.

He hears that McDonald’s is still selling burgers, and suddenly all the memories come flooding back.

Why has no one updated Wikipedia with The Hamburglar’s new life status as a hot dad? #RobbleRobble

The hamburglar has no business being that damn hot

The new Hamburglar is kind of a DILF. https://t.co/M3JyUESLml pic.twitter.com/mVd0SKkmOI

Someone praised his taste in footwear:

A couple tweeps posited the mascot’s own hipsterrific lifestyle choices:

This new hamburglar looks like he only steals from whole foods. #Hamburglar #McDonalds

Other folks were not loving this new look, though. People who hated it felt the makeover was too creepy for their taste (and for their kids’ own good), and tagged him as someone most likely to lurk behind school playgrounds, or grinding on a stripclub stage:

Hide your lunch: McDonald's brings back the Hamburglar He looks like a creepy COSPLAYER… #robblerobble https://t.co/vA7xrE1TbN

The Hamburgler is back & @McDonalds remakes him kinda creepy… https://t.co/HdpxzLTLFL #RobbleRobble @McDonaldsCorp

Why is the new McDonald's #Hamburglar so creepy? "Shhhhhhh…Bring me your children. There's candy in my van." pic.twitter.com/NeQ8N2botI

Get Free Food At McDonald’s For A Little Lovin’ [Video]