Pizza seems to always save the day.

One lady used the Pizza Hut app to get help for her and her son after her boyfriend held them hostage. Cheryl Treadway had been arguing with her boyfriend, Ethan Nickerson. Nickerson became enraged and pulled out a large knife. He then refused to allow Treadway or her children to leave the house. That’s when her quick thinking led her to order a pizza. 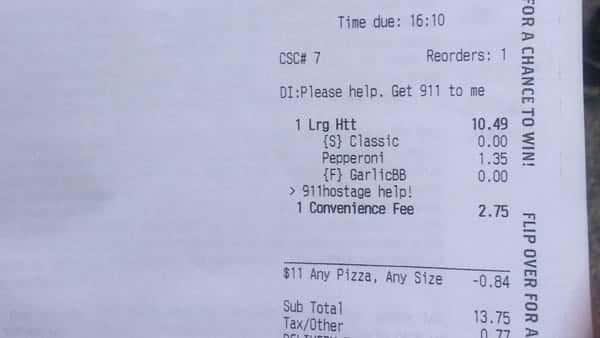 The Highlands County Sheriff’s office released a statement on the incident:

“At approximately 3:40PM on Monday, May 4th, an online pizza order was received by the Pizza Hut in Avon Park. Under the comments section there was a message asking them to send help and call 911 as they were being held hostage. Pizza Hut employees recognized the order as from a frequent customer however the comments were out of the ordinary so they called the Highlands County Sheriff’s Office to investigate the situation.

Deputies responded to the Pizza Hut and to the delivery location for the order. Upon arrival at the home, deputies were greeted by a female, Cheryl Treadway, carrying a small child in her arms. She related to deputies that her boyfriend, Ethan Nickerson, was in the home armed with a knife and Nickerson, Ethan Earl that her other two children were also in the home with him. After she was escorted to safety, deputies approached the home. Lieutenant Curtis Ludden began to speak with Mr. Nickerson through the closed door of the home. After about 20 minutes, Lieutenant Ludden was able to talk him into coming out peacefully. The other two children were then removed from the home, unharmed.

As a result of these events, Ethan Earl Nickerson, 26 years of age, was arrested and charged with aggravated assault with a weapon without intent to kill, battery, false imprisonment and obstructing justice by depriving communication to law enforcement.

Fortunately for Ms. Treadway, she was a well-known customer at Pizza Hut and the employees were able to recognize something wasn’t right. Plus, we always wondered what the special instructions box was for. Apparently, it is to call for help…

This isn’t the first time pizza has saved the day. Just last October, a lady called a local Pizza Hut. After acting bizarrely, the Pizza Hut employee became concerned and decided to call the police. It turned out the woman was a victim of domestic abuse and she could not call 911, so she told her abuser she was going to order pizza.

The call happened more than 10 years ago, but recently became viral after the 911 dispatcher posted the call’s transcript to a reddit thread.