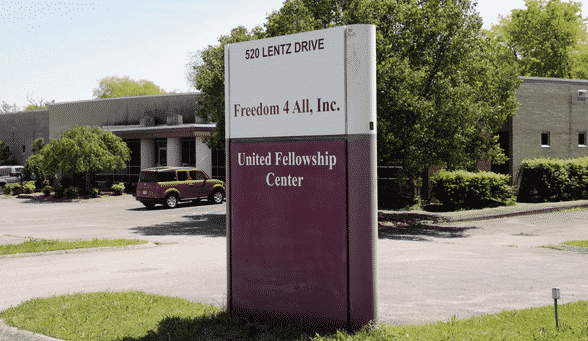 The Social Club in Nashville Tennessee has been holding parties for consenting adults to ‘mingle’ since 1980. With a motto of, “Remember, we are all strangers until we meet!”, the club allowed members to fulfill sexual fantasies of all kinds with private rooms, play areas and dungeon.

The club decided to move out of downtown and into the suburbs, but it seems the ‘burbs aren’t down with their swinging ways. The club purchased a building next to a Christian school and the neighborhood immediately began protesting, citing zoning laws. To get around these zoning laws, The Social Club rebranded themselves into a church that allows their members to practice their faith.

The club’s lawyer says the constitution is on their side, even though the city says it is all a sham.

“They can sue us and say they want an injunction to stop us from operating, and we can say we have some tenets of the church sort of like the Ten Commandments,” Roberts said. “Do not steal. Do not lie. Do not cheat. Do not commit any act that will be harmful to others. Do not commit adultery without the knowledge and consent of your spouse. That one’s a little bit different.”

The debacle began after the club bought a building that was perfect for the concept. The only problem was the location. Located between a Christian school and churches, the move sparked a huge controversy.

Roberts says the protest is a form of discrimination.

“It’s the biggest bunch of bigots that I would into run into except maybe at a Klu Klux Klan meeting. When my clients first began considering this, I said, ‘With this location, you’re going to create a firestorm of controversy.’”

With more than 400 parents showing up to hearings about the club, the neighborhood is pretty upset with the newcomers. They believe it would go against the children’s safety.

“Madison is a really good, solid, suburban community in Nashville, very family-based,” said Karen Bennett, neighborhood representative. ”Most people feel like this would be a black eye to have this adult club. It’s not what they want for their community.”

“[The swingers] seem to think that they would be quiet neighbors, and I don’t think that’s really the case,” she said. “Kids ask questions and they want to know what is going on.”

The club is sticking to their guns though and it seems even negative publicity is good publicity.

“The parties have been huge since all this has happened,” he said. “It’s been outstanding, standing-room only.”

Parents Discuss Sex With Children, And It Gets Awkward [Video]

Gift-giving isn’t just a seasonal affair between friends, families and acquaintances. The art of gift-giving is also conducted on a national scale with countries often sending each other big, weird and expensive gifts. Experts in all things gifts, Vanilla Reindeer put together some examples of these expensive and odd gifts that have been shared between… END_OF_DOCUMENT_TOKEN_TO_BE_REPLACED

There are lots of ways you can make Pres. Trump feel welcome: you can offer him coffee, or mow a penis into a field for him to view as his plane lands. The willie in question has been chopped by Born Eco ahead of the arrival of President Trump, who visited the UK Monday for… END_OF_DOCUMENT_TOKEN_TO_BE_REPLACED

The year isn’t even halfway over, yet Donald Trump has managed to make a fool of himself and our country countless times. From inviting the national college football champions, the Clemson Tigers, all the way to the White House for some McDonald’s to his to the dreaded results of Mueller’s investigation, it has been one… END_OF_DOCUMENT_TOKEN_TO_BE_REPLACED

Republicans have always said that when they gained control in Congress, they would work to overturn Roe v. Wade and here they are, cashing in on that promise one state at a time. So far, Alabama, Arkansas, Georgia, Kentucky, Missouri, and Ohio have all passed incredibly restrictive laws on abortions, making it illegal for women… END_OF_DOCUMENT_TOKEN_TO_BE_REPLACED

If you’re on Snapchat, then you’ve probably played around with (and were likely horrified by) their filter gender swap filters. While you’re probably using these filters to send hilarious pics to your friends, some guys using them to create Tinder profiles. What likely started out as a joke has quickly evolved, and these guys are… END_OF_DOCUMENT_TOKEN_TO_BE_REPLACED

“Milkshaking” is a hilarious trend in Britain where a milkshake is thrown at and ideally lands on a far-right politician or activist. The point of this nonviolence protest is to humiliate them without causing injury. Physical injury at least. There’s no doubt that milkshaking has led to a few bruised egos. Not only is this… END_OF_DOCUMENT_TOKEN_TO_BE_REPLACED