Man Hangs up on “Pope Prank Caller”, Finds Out It’s...

It’s no secret that Pope Francis is a pretty nice guy. He takes the time to keep in touch with the Catholic faithful, whether it be in person, via social media, or over the telephone. He’s also quite good-natured and tenacious, as one unsuspecting person found out.

Pope Francis not only makes it a point to sneak out at night to visit the poor in ordinary priestly garb, out he also personally writes to or calls up people who have written to him or has had problems he hears about.

Franco Rabuffi was sick in bed, and received one such phone call — which he promptly disconnected. He disconnected the second incoming phone call, thinking that the Pope was just another prank caller. A third phone call was what it took to make Rabuffi realize it was seriously him. Rabuffi shares, “I was speechless but Francis came to my rescue, saying that what had happened was funny.” He and his wife soon appeared before Pope Francis during the Vatican’s general audience to apologize for his mistake. We can very well imagine the Pontiff chuckling it off, and patting Rabuffi on the back for it. 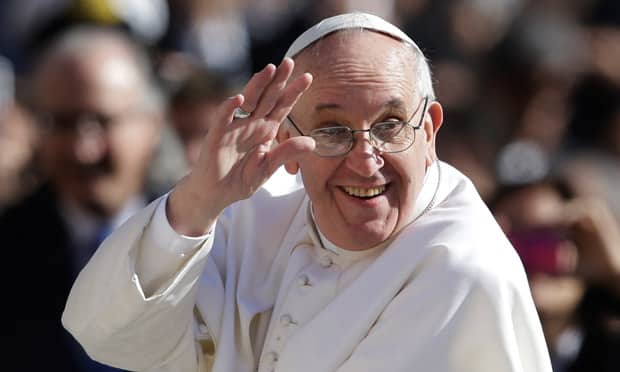 Ever since his appointment as Head of the Catholic church back in 2013, Pope Francis has been making waves and bringing sunlight and a fresher perspective to the church. The first milestone move he made was to call both the clergy and the faithful to practice a frugal lifestyle, and he himself shunned expensive attire, changed the papal seat from an elaborate gilt throne to a humble and sensible seat, and called in a list of cardinals to explain their costly decisions and lifestyles.

He has made himself more accessible to the faithful everywhere, and has embraced diversity. He welcomed the LGBTQA faithful, raised up PWDs and victims of violence and gave them visibility in the media, and embraced believers of other faiths and atheists who do good.

The Church is young, as everyone can see at WYD. May the Lord always keep us all young at heart. #Rio2013 #JMJ

Pope Asks Followers To Pray For Him On Twitter