To say Breaking Bad and Better Call Saul have a large number of fans would be an understatement. These shows have fans that are obsessed. There are people who went through a mourning process with the finale of Breaking Bad and are slowly getting past the grief by tuning in to Better Call Saul. The mastermind, creator and head writer of these hit TV Shows, Vince Gilligan cleared his busy schedule today to sit down and host a reddit AMA.

Despite having a cult following, it seems some redditors were confused about who Vince Gilligan was. In fact, one user thought the AMA had something to do with Gilligan’s Island. 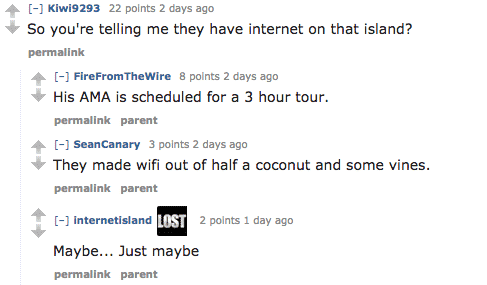 During the AMA, someone even asked “Mary Ann or Ginger?” Gilligan didn’t answer though.

So, the AMA kicked off just like any other one. Vince Gilligan introduced himself and told the reddit world to ask whatever they wanted. Nothing was off limits. He also took the time to tell his fans about an opportunity to win a trip for two to Los Angeles to have lunch with him personally. The giveaway is an effort to support the theater arts through the Geffen Playhouse.

Of course, the questions immediately began pouring in. Most of them were about his hit show, Breaking Bad. One user asked him what gave him the idea for the show. Gilligan’s answer was surprising. It seems the show was the brainchild of a joke.

Speaking of inspiration, users wanted to know what fueled Gilligan’s passion for writing great shows. The success of Breaking Bad and Better Call Saul are just recent accomplishments to Gilligan’s resume. He got his big break writing for the hit FOX show, X-Files. In a crazy chance of fate, Gilligan sent a script to Fox producers. His script became one episode in the second season. He went on to write countless episodes, serve in many different producer roles for the magnitude of the show’s run. He also co-created the X-Files spin-off, The Lone Gunmen. So, what happened in Gilligan’s life that made him so creative?

That’s enough of the sentimental talk.

Of course, there were questions about the physical production of Breaking Bad: the set, scenery, colors. For example, people were asking, “Why did you choose Albuquerque, Arizona?” “How did you choose the locations.” Bla, bla, bla. The normal fan questions. But, there were those that wanted to get to the good stuff. Like, what’s up with Los Pollos Hermanos?

On the topic of food, one user just had to know Gilligan’s preference for one restaurant in particular. #Dontask.

There was lots of talk of food, even when the users stayed on the topic of Breaking Bad. Of course, someone had to ask about one of the most iconic scenes, when Walter White throws a pizza on his house’s roof. Coincidentally, fans travel to that very house to reenact that scene by throwing their very own pizza. Unfortunately, the house is a real residential home and the family that lives there really don’t appreciate pizza on the roof. 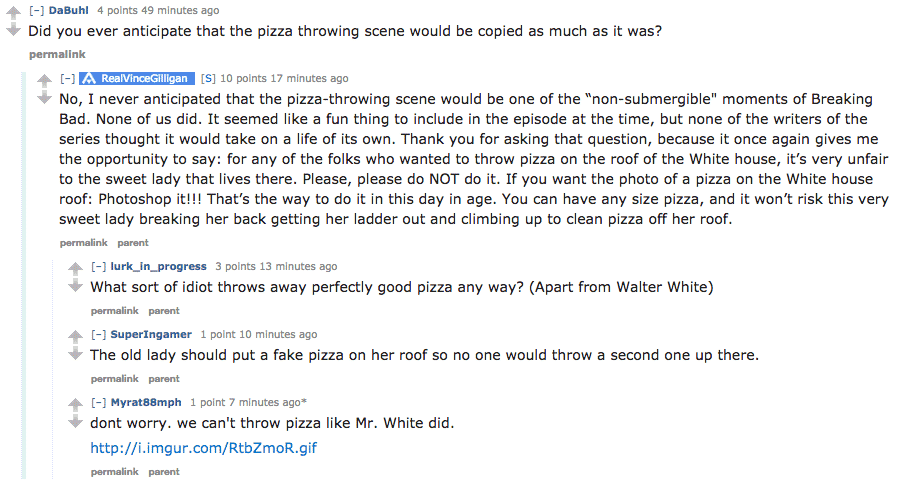 Gilligan is very adamant about getting Breaking Bad fans to stop pestering this poor family. Months ago, he spoke out about it, calling fans to stop at a convention Q and A. He also tweeted out a plea to those pizza throwers.

Many questions were about the behind the scenes moments. The cast has been very open about how close they had become during the show’s filming.

The conversation wasn’t all about Breaking Bad. You can’t have a conversation with Vince Gilligan and not bring up his latest television hit, Better Call Saul. The show is a huge hit, but it seems Gilligan was a bit nervous about launching the spin off.

So, he is prepared for the show to one day become a bomb. It seems to be safe to say, the show will be a hit until the very last episode, just like Breaking Bad. But, it’s nice to know Gilligan has a backup career plan in case things go south.

Of course, Breaking Bad and Better Call Saul are not new topics to the reddit universe. In fact, both shows have multiple threads dedicated to the shows. One user had to know, did any of those conversation inspire a part of the show? Gilligan’s answer was no, because this was actually his first time on reddit.

Of course, there is always that one fan that brings up a hilarious sketch or viral video about the AMA subject. This user tells Gilligan about a Funny or Die parody that explains what happened to Huell, Saul’s (Walter White’s lawyer) assistant in Breaking Bad.

Disclaimer: If you aren’t familiar with the Breaking Bad series finale, this video will not make much sense to you.

Gilligan hadn’t seen this parody before and found it pretty funny. So, it was a good day for this reddit user.

With such a big fan following, it seems inevitable that Gilligan has encountered some pretty crazy fans. One user asked him what was his most memorable encounter with a fan. We expected a crazy story about a meth head holding him up at gun point asking him for Walter White’s recipe or something completely off the wall. Unfortunately, his answer was strange, but not that mind-blowing.

Wonder what they named the baby? Jesse? Walter? Nacho?

Parody: This Is What Happens When “Breaking Bad” Meets “Frozen”