The Apple watch is the latest product from the tech company that promised to revolutinize the mobile experience. Consumers waited for the day they could proudly don their very own Apple watch. While many love the newest member to the Apple gadget family, there are a huge group of society that are realizing their watches won’t even work correctly.

Apparently, tattoo ink isn’t compatible with the watch’s sensors and some Apple fans are seriously pissed. Disgruntled tattooed reddit user, guinne55fan shared his woes on to /r/apple on Monday.

He writes: “So I thought my shiny new 42mm SS watch had a bad wrist detector sensor. The watch would lock up every time the screen went dark and prompted me for my password. I wouldn’t receive notifications. I couldn’t figure out why especially since the watch was definitely not losing contact with my skin. also I couldn’t find anything online with people experiencing this issue. I was about to give up and call Apple tomorrow when I decided to try holding it against my hand (my left arm is sleeved and where I wear my watch is tattooed as well) and it worked. My hand isn’t tattooed and the Watch stayed unlocked. Once I put it back on the area that is tattooed with black ink the watch would automatically lock again. Just wanted to give anyone a heads up about this issue because I don’t see it mentioned anywhere in Apple’s support documents.”

He warned others of his alleged problem and even uploaded photos to show the size of his tattoo in regards to the watch’s placement. 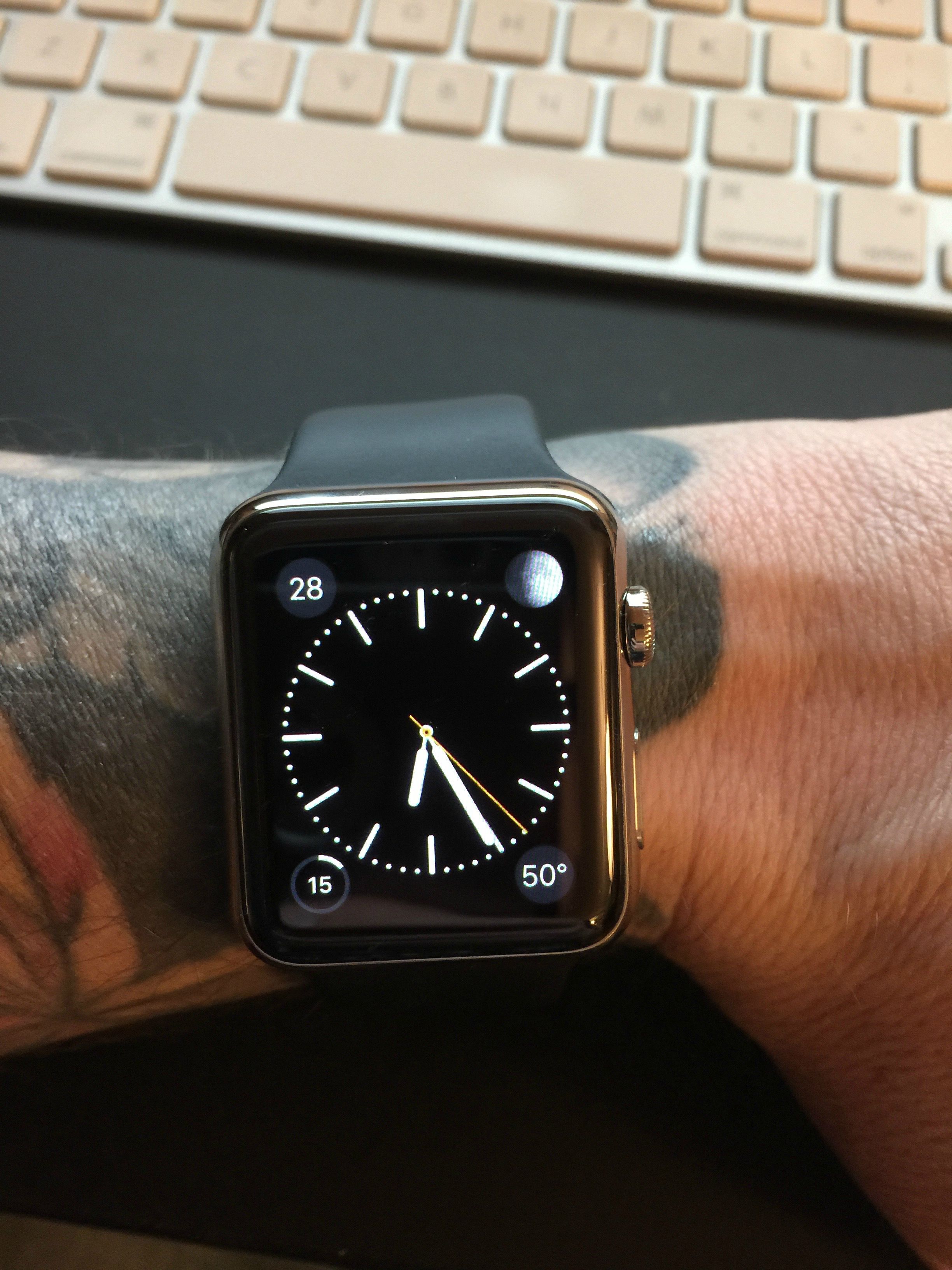 As his problem began trending, #TattooGate was born.

It quickly became clear that many other tattooed Apple fans were having the same problem.

While it wasn’t clear what caused the problem, many speculated that it had something to do with the watch’s sensors.

“Wrist detection relies on light sensors on the back of the device which also serve as a heart rate tracker through a method known as photoplethysmography. By flashing infrared and/or green LED lights, the Watch can detect blood flow. Dark skin color could theoretically affect accuracy, although Apple states that the Watch will increase LED brightness and sampling rate to deal with tough reads,” Roger Fingas wrote on Appleinsider.

Even a redditor tried to give a reason for guinne55fan’s problem:
“Oxyhemoglobin has several local peaks of absorbance which can be used for pulse oximetry: one green, one yellow, one infrared, etc. Apple uses the ones at infrared and green parts of the spectrum. Now, here’s some key facts. Melanin and ink are both equally good at absorbing frequencies over 500nm, which sadly includes the green. But, melanin’s absorbance falls down so rapidly that by the infrared end of the spectrum its hardly absorbing anything at all. That, combined with the fact that Apple adjusts the sensitivity/light level dynamically means infrared is probably black people friendly. Ink has a much more gradual fall off in absorbance, so even infrared might not work for them.”

Eventually, guinne55fan took his problem to Apple and posted his update: “I spoke with Apple and informed them of my situation. the applecare specialist was really good, walked me through a bunch of steps to try and alleviate another issue I’m having (making calls from the watch). they are reporting to engineering and i should hear back from him this week regarding my call issue and the detection issue.”

Basically, the light sensors are meant for skin colors, which allow light to bounce off. With dark colored tattoos, the skin is absorbing the light and the sensors aren’t receiving anything.

While this is just a theory, iMore did some testing of their own.

“Dark, solid colors seem to give the sensor the most trouble — our tests on solid black and red initially produced heart rate misreadings of up to 196 BPM before failing to read skin contact entirely. Tests on lighter tattoo colors including purple, yellow, and orange produced slightly elevated heart misreads of 80 BPM (compared to 69 BPM on the wearer’s non-tattooed wrist), but otherwise did not appear to interfere with skin contact registration.”

Well, I'm one of the #TattooGate #applewatch users. Have to wear it on less comfortable right wrist because of "youthful indiscretion". Lame

For now, experts recommend turning off wrist sensor off.

There are some lucky tattooed Apple users that said their Apple watch works despite their tats.

Sleeved all the way to my wrist. #applewatch runs perfectly. #tattoogate is a lie. https://t.co/lpapT8Cd1M

90’s Kids, Rejoice! The Tamagotchi Is Now On Your Apple Watch