Iraqi Maestro and Cellist Karim Wasfi carried his instrument and sat among the rubble of a shopping district bombed not long an hour ago.

The song that was drawn out from Maestro Wasfi’s bow and strings was not a mournful one, but a smoldering, fiery fugue that sent a clear message to the ether that Baghadad still stands strong, and that the human spirit is insurmountable and will never yield to terror or evil. 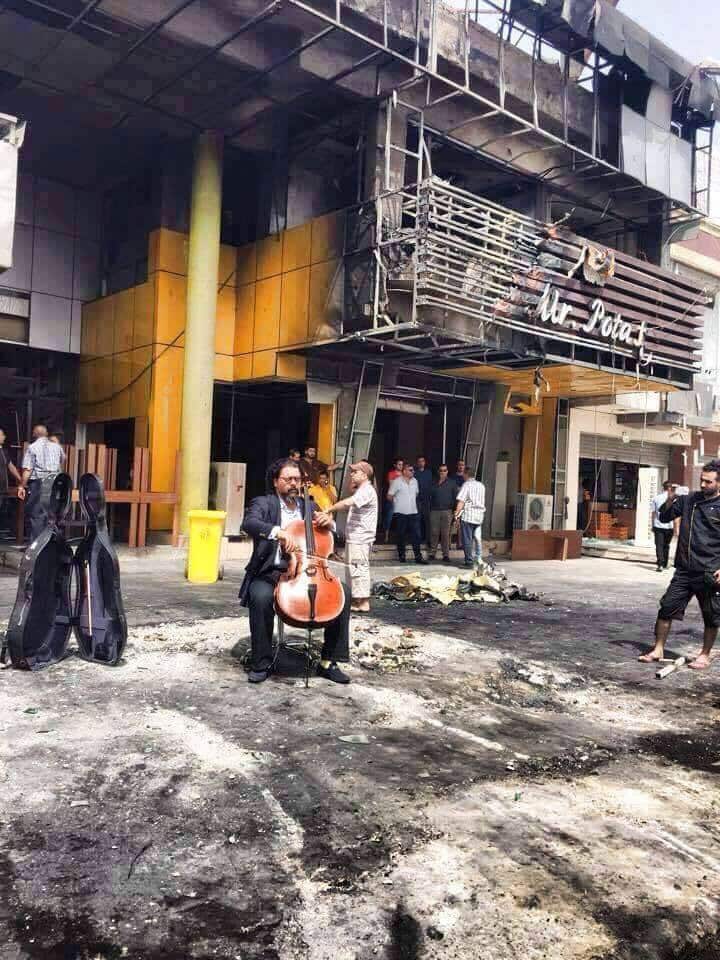 Shop owners clearing out the debris from their shattered stalls stopped to listen, and soon a crowd mushroomed in front of Wasfi, digital cameras at the ready to record his performance, It soon turned viral as a video upload on Facebook, and users around the world liked and shared  it in support of the Maestro’s act of courage.

His timing is also impeccable, as the government decided to lift its decade-long curfew in February. Wasfi shares with NBC News: “Lifting the curfew will help us to find a wider chance to show our art and creativity to the people. I hope that the freedom of movement is not going to cause problems for the people.”

Wasfi’s gesture is particularly compelling and stirring, as Iraq’s state government has only recently lifted its ban on music and all forms of artistic self-expression. He has held unpublicized, guerilla concerts to keep the spirit of Iraqi culture and art alive in the face of the ban. He once expressed his intentions to an audience at one such concert, according to NPR — “”If anyone from any sect bets against gatherings like this one, they’ll lose the bet. But if you don’t agree with me, don’t cut my head off.”

This bombing has been the most recent in a series of car bombings targetting Iraq’s busiest commercial districts in Baghdad, which has killed at least 20 people since Monday. The car that exploded at midnight has killed 5 civilians and injured another 15.

The Maestro expressed his sentiments behind the bombing-site performance to 7 Days In Dubai:

“We just want to live a decent and safe life like people in Europe and America. Bombing is not a solution for our problems.”

“The Iraqi people want to live and protect their civilization and heritage. Civilization started in Iraq and will continue and never die.”

You may also enjoy:
This Girl Is On Fire: Aryana Sayeed Sings Out for Afghanistan