Stephen Hawking: Zayn Malik Still in #OneDirection… In a Parallel...

Directioners, rejoice. Science is on your side, and Stephen Hawking says so.

Saturday last week, luminary astrophysicist Stephen Hawking appeared at a talk in the Sydney Opera House in holographc form. He was streamed in live from Cambridge University in the UK, and were joined onstage in the flesh by both science communicator and his daughter Lucy Hawking, and physicist Paul Davies.

After a series of thought-provoking queries about the nature of the cosmos, one final question came in from a certain Samantha Sue: “What do you think is the cosmological effect of Zayn Leaving One Direction, and consequently breaking the heats of millions of teenage girls across the world?” At this, Professor Hawking smiled at a very-perplexed Davies.

“Finally, a question about something important,” the lauded cosmologist beeps, much to the laughter and applause of the audience. 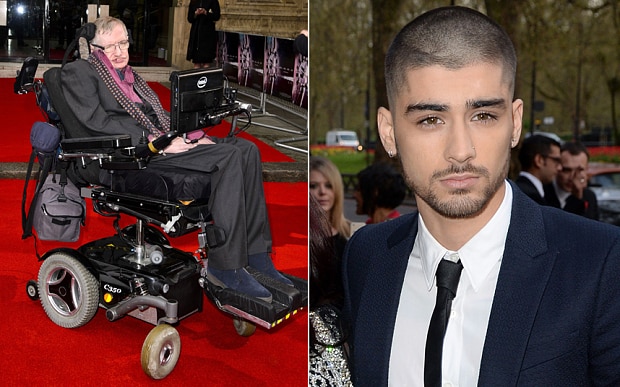 “My advice to any heartbroken your girl is to pay close attention to the study of theoretical physics — because one day, there may well be proof of multiple universes. It would not be beyond the reams of possibility that somewhere outside our own universe lies another different universe. And in that universe, Zayn is still in One Direction.”

But Professor Hawking doesn’t stop there. “This girl may even like to know that,” he grins, “in another possible universe, she and Zayn are happily married.” Aaaaaw.

Could this be Hawking’s own way of encouraging girls to take to STEM topics? One thing is for sure, this cosmologist will always encourage both young and old alike to keep moving onward and upward, and to always look beyond the stars for endless possiilities.