So recently at the White House Correspondent’s Dinner, Barack Obama brought in an “anger translator” to dish out some real burns on certain issues that needed addressing. 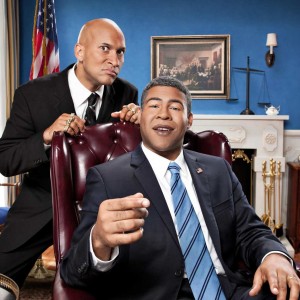 Luther the Anger Translator is a character used in many of the comedy duo Key & Peele’s presidential address skits. These skits feature Jordan Peele impersonating Barack Obama and Kegan-Michael Key as his ever-trusty, ever-incensed, and ever-sassy translator Luther. Only this time, the real Obama called on Luther to give his audience the real score on certain issues while couching it in some riotous street-talk comedy. With all the President’s cool, detached, “never-get-angry” rhetoric, Luther was a refreshing complement to really get how Obama felt out there.

From start to finish, the POTUS and Luther delivered some burns that night:  Fox News, CNN’s week-long coverage of the Ebola epidemic, and climate change deniers, just to name a few.

The audience either loved the zingers, or hated them: a good number of politicians and their guests had a good belly laugh, and Laverne Cox was clearly seen having a good time at her table. On the other hand, half of the audience were having absolutely none of it, looking either rather discomfited or bored with the whole performance.

Obama made mention of an astouning $6-million-dollar donation from Ted Cruz and how the Supreme Court had ruled it as “just exercising free speech”, to which Luther explained, “Yeah, that’s the kind of speech like this, ‘I just wasted six million dollars.'” The president alo mentioned how Hillary Clinton would have to raise a similar sum, and Luther starts: “Oh, yes. She’s gonna get that money. She’s gonna get all the money. Khaleesi is coming to Westeros! So watch out!”, much to the cheering of the audience.

The tables were turned, however, when Obama began discussing climate change. He gradually worked up a fine simmer over the most recent scientific facts and its deniers, when even Luther had to calm him down: “with all due respect, sir, I don’t think you need an anger translator, I think you need counselling.”