Harrison Ford. The man who played one of the most iconic space pirates and gunslingers of all time, had a Wookie for a best friend, and made us swoon with two simple words: “I know.” The man who had us holding our breath as he dodged rolling boulders, plunged the depth of wondrous and mysterious locales, and became the most dashing, Nazi-defying archaeologist we loved. The man who prowled the gritty streets of a dystopian concrete jungle, hunting down chilling body-snatcher robots. All these roles he played, and more, and embedded his adventures and escapades in our minds.

Now, watch Harrison Ford get the goosebumps over a not-entirely-simple card trick, courtesy of none other than David Blaine. 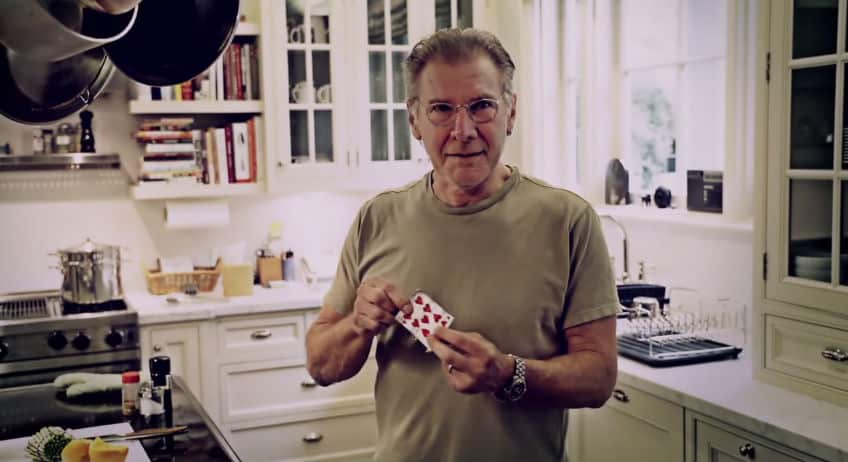 David Blaine is not one for flashy performances and on-stage magic in glitzy costumes and enormous felines. In fact, this illusionist is best known for taking his prestidigitation to the streets and prefers his audience encounters to be up-close and personal, dumbfounding crowds with anything from card tricks to sleight-of-hand. His endurance performances are astounding in their brutal simplicity: from being buried alive in a 3.5 ton tank of water in New York to being left on a 100-foot high, 22-inch wide pillar in Bryant Park, unfettered and unharnessed, as he withstood a full 35 hours of being battered by the biting cold and harsh winds of May.

Time magazine lauded Blaine with the statement, “his deceptively low-key, ultracool manner leaves spectators more amazed than if he’d razzle-dazzled.” Penn Jillette, the vocal half of the skeptic-illusionist duo Penn & Teller, says of him, “The biggest breakthrough done in our lifetime was David Blaine’s Street Magic, where his idea was to do really simple tricks but to concentrate… to turn the camera around on the people watching instead of the people doing. So to make the audience watch the audience, which that first special Street Magic, is the best TV magic special ever done and really, really does break new ground.”

So how does low-key illusionist David Blaine freak Harrison Ford in his own home?

‘Magic for Dogs’ Is Back, With An Even More Hilarious Confusion Video