Kermit The Frog may just have met his long-lost twin.

A newly-discovered frog deep in the heart of the Amazon rain forest is not only causing quite the stir in the Science world. It’s also creating a big buzz in Jim Henson’s fuzzy muppet world, too, and it’s pretty easy to see why.

Meet Hyalinobatrachium dianae, or Diane’s Bare-breasted Glassfrog, a googly-eyed amphibious resident of Costa Rica’s sprawling rainforest ecosystem, and the newest darling of the zoological field. Brian Kubicki, the frog’s discoverer, decided to name it after his own mother, Janet Diane Kubiki. 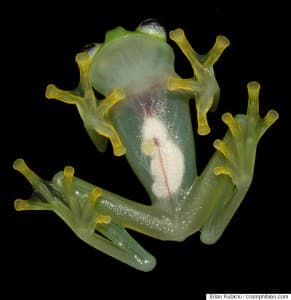 The science world is overjoyed to be able to say this frog is a truly distinct species from the other glass frogs previously discovered, many thanks to its unique physical traits. However, they also noticed that its call – a long, metallic whistle sound — sounds much closer to an insect’s than an actual frog’s, and experts postulate that this was one of the reasons it took so long to discover this new creature.

Diane’s Barebreasted Glassfrog looks resplendent in its vibrant lime-green coloring. Its horizontal pupils make it look exactly like our beloved Kermit — but it’s its translucent skin that gives it its name. All you need to do is flip the frog over, and be amazed.

Disney wasted no time in getting a one-on-interview with Kermit the Frog on his thoughts on this new frog on the block, as well as his thoughts on Costa Rica, and how this could affect his relationship with Miss Piggy.

Disney: Does this discovery make it any easier being green?
Kermit: Absolutely. Being green is easy compared to being transparent. I thought that I blended in with so many other ordinary things. And that people tended to pass me over ’cause I wasn’t standing out like flashy sparkles in the water or stars in the sky.

But when you’re transparent, folks really look right through you. It’s almost like you’re invisible …. which might come in handy around Miss Piggy. I take it back. I want to be transparent.

Disney: Have you ever been to Costa Rica? Do you plan to visit based on this news?
Kermit: I have been to Costa Rica. I love it! And I have a virtual plague of cousins down there. In addition to the glass frogs, there are red-eyed tree frogs, poison dart frogs, and the smoky jungle frogs.

Disney: Most importantly, how did Piggy react to the news?
Kermit: She’s jealous. Not about me being involved with another frog, she’s just jealous that this new frog is getting more publicity than her. And as for being transparent, that’s nothing new for us. Piggy and I have a very transparent relationship. Every time I make an excuse about a date or marriage, she sees right through me.

We feel you, Kermit.

Miss Piggy Could Be Coming To Primetime