Actor and heartthrob, Chris Pratt spent some time with the Internet today during a Reddit AMA. Pratt is a leading Hollywood actor with roles in both television and films. Best known for his role in Guardians of the Galaxy, Pratt hasn’t always been a leading man. Working various jobs from salesman to stripper, he ended up homeless in Malibu. In fact, he waited tables at the Bubba Gump Shrimp Company before he was discovered by actor-director Rae Dawn Chong at the age of 19. He was casted in her directorial debut, Cursed 3. His career began to take off with television roles in Everwood and Parks and Recreation. After many failed auditions for films, such as Avatar and Star Trek, he was finally cast in a supporting role in Moneyball. This role lead to bigger roles, such as Guardians Of The Galaxy. He is now known as one of the biggest actors in Hollywood. 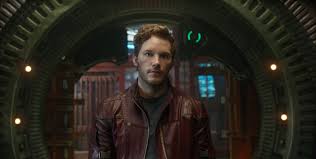 Pratt kicked off his Reddit AMA with the disclaimer that he was still half-drunk from the night before. This fact will come back into play after one user’s question. Things immediately got interesting. Reddit user rubberboy sked Pratt to clear up the rumor that the actor used to live in his house. Amazingly, the answer was yes.

Of course, there where funny moments, but the coincidences just kept coming. Like when YaketyMax asked Pratt what he thought about this video featuring clips of Pratt dubbed to Dr. Dre’s “Forgot About Dre.”

Pratt didn’t say anything about the video, instead he shared the fact that he had met Dr. Dre the night before, which led one user to believe that is why he was still half-drunk and probably under the influence of substances other than alcohol. 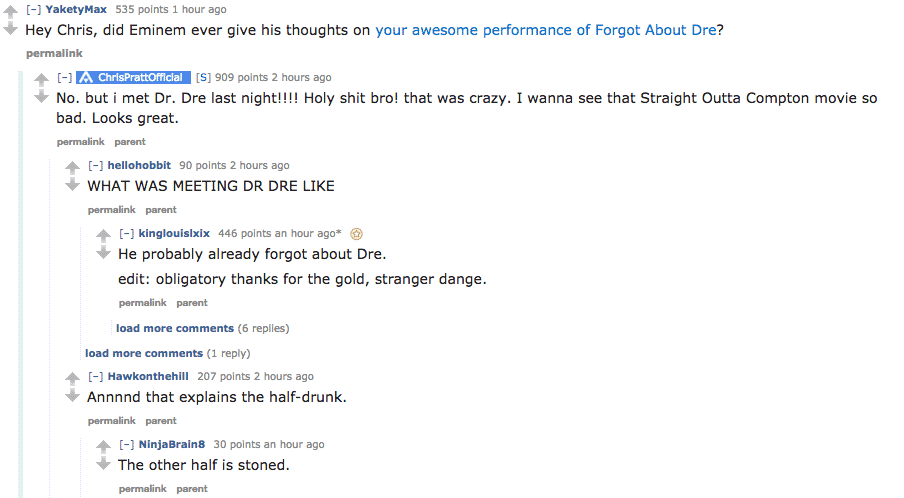 The mention of marijuana doesn’t seem to faze Pratt. He says he used to smoke a lot of weed in his past, which leads us to believe he probably still does. At one point he was asked what his characters, Andy Dwyer, Johnny Karate and Bert Macklin would be doing. Pratt replies, “Here’s something you might not have known about those characters. They smoked a lot of weed. they’d probably be doing that right now.”

One of the biggest topics of the AMA (and probably the reason Pratt participated in the first place) was his upcoming film, Jurassic World. Reddit user, rocker2014 brought up yet another ironic topic.

The AMA quickly filled with questions. Within the first three minutes of the thread, there were already 400 questions. Pratt managed to answer 20 of them, which were all posted in those first 3 minutes of the AMA session. This led to many users complaining that they didn’t have a chance to participate and saw questions far after they had been closed. #firstworldproblems.

After answering questions for a brief time, Pratt had to rush off to a guest appearance on Jimmy Fallon. He signed off by explaining how much he loves his fans. He also plugged his upcoming movie, Jurassic World.

“Thank you guys for the questions. I have to go. I am doing Jimmy Fallon in a minute. I am so thankful for all the support, it truly means a lot. You guys have been really nice and cool. And I mean that. I have very few haters (not to brag) and that is nice because I am a people pleaser and I will do anything to make you like me. Absolutely anything. I mean it. I’ll tell you to hit me up with all your strange sexual and non-sexual requests… wait, no… I’m hearing this is over now. Oh well. I love you. Go see Jurassic World if you please and here’s a link to a clip. Take care. God bless. See you at the movies!”