Ricky Gervais Goes On Twitter Rant, Speaks Out Against Animal...

British comedian Ricky Gervais has been very busy on Twitter recently after a public photo of American hunter Rebecca Francis smiling and lying down next to a dead giraffe she killed back in 2010 went viral.

Gervais tweeted out the photo to his 7.64 million Twitter followers with the following message, “What must’ve happened to you in your life to make you want to kill a beautiful animal & then lie next to it smiling?”

What must've happened to you in your life to make you want to kill a beautiful animal & then lie next to it smiling? pic.twitter.com/DyYw1T5ck2

After the comedian initially spoke out, it lead others to express their anger towards hunting animals even after Francis and other hunters explain why they hunt and all of the “beneficial” things that come with it.

The controversial image went viral once again, thanks to Gervais, the Rebecca Francis has been receiving death threats and hateful messages. The hunter spoke out on the matter, HuntingLife.com’s Facebook page posted it with another photo: 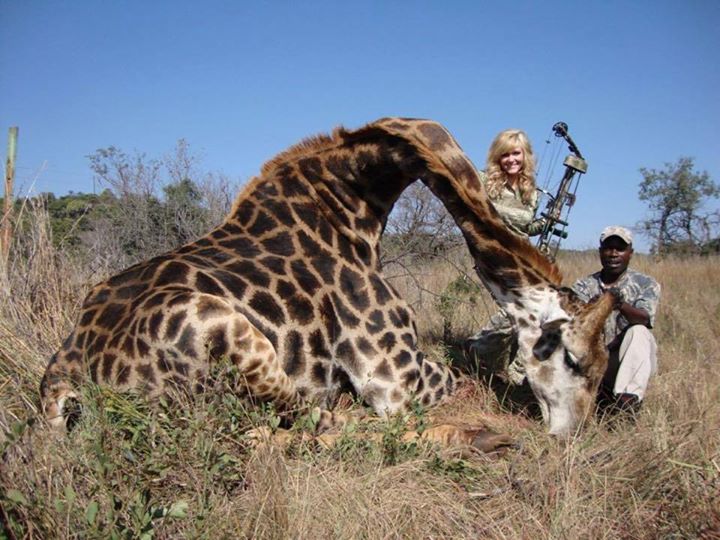 “When I was in Africa five years ago I was of the mind-set that I would never shoot a giraffe. I was approached toward the end of my hunt with a unique circumstance. They showed me this beautiful old bull giraffe that was wandering all alone. He had been kicked out of the herd by a younger and stronger bull. He was past his breeding years and very close to death. They asked me if I would preserve this giraffe by providing all the locals with food and other means of survival. He was inevitably going to die soon and he could either be wasted or utilized by the local people. I chose to honor his life by providing others with his uses and I do not regret it for one second. Once he was down there were people waiting to take his meat. They also took his tail to make jewelry, his bones to make other things, and did not waste a single part of him. I am grateful to be a part of something so good.”

Initially, Gervais posted the following tweet to address animal hunters as a whole (it is indeed a photo of Rebecca Francis with her latest kill) and with that came some serious internet digging and the smiling hunter/giraffe photo blew up.

Then he realized how much influence he could have by speaking out on the matter and was not backing down.

My post about the giraffe hunter was seen by 27 million people on Twitter & Facebook in just one day. Keep up the good work. It all helps 🙂

After killing that giraffe out of the kindness of her heart and feeding the poor locals she had these for pudding. pic.twitter.com/P3nP4ACDKI

This Tofu & Rice was old and sad and wanted me to kill it. Now I will eat it. pic.twitter.com/5vsstpUZaL

Like all things posted on the internet, people pick them up and twist them in various ways. His tweets were then spun to be “sexist.” So he cleared that up real quick.

"I kill lions, giraffes & bears with guns & bows and arrows then pose grinning. Why don't people like me? Must be because they're sexist"

We need to stamp out this terrible sexism in the noble sport of trophy hunting. The men & women that do it are EQUALLY vile & worthless.

THEN the comedian had to explain further that he wasn’t attacking hunting, yet the hunting for “thrills” and things to hang up on your wall.

I wish people would stop confusing hunting to eat and hunting for thrills, tusks, or to hang an endangered species on the fucking wall.

Buckle up, people. Ricky Gervais is not finished yet.

These psycho trophy hunters always have stuff about their family being everything to them on their profiles. Elephants love their family too

The trophies I'm proudest of are the memories of all those times I didn't kill a beautiful, majestic, endangered species for no reason.

Imagine getting all dressed up to look good knowing you're about to murder a baby elephant's mother and take a selfie with it.

Have a peaceful night pic.twitter.com/36jYdrOOxi

The celebrity and animal cruelty activist spent most of his Saturday speaking out on the topic. He has continued to post similar tweets to hopefully keep the momentum going about sticking up for animals and disregarding any positive twist used towards Rebecca Francis.

I'm sure we'll never stop some sick people killing animals for fun, but can we at least stop rewarding them in reality TV shows about it?

You don't use a bow & arrow and then take a smiling selfie in a mercy killing. She wanted to murder a giraffe & she did. Fuck the bullshit.

Have a peaceful night. pic.twitter.com/mIi9ZSrf7D