This is the mashup Westeros has been waiting for.

In the world of Westeros, death — in all its visceral, bloody, nauseous goodness — is pretty much run of the mill here. Today, a beloved honor-bound character is beheaded, tomorrow, a mighty badass warrior gets felled by a badly-treated infection (and his wife’s heartbreaking compassion.) Oh, throw in a hunting accident, dismemberment, poisonings, corpse desecration — fun for the whole family!

Russian Animator Egor Zghun takes on a fun romp across the many tragic deaths in George R. R. Martin‘s universe — and manages to make it all adorable as anything. Cue the Dumb Ways To Die (Game of Thrones Edition) mashup, where vengeful bodily harm is absolutely peachy in a song-and-dance number.

The original video Dumb Ways To Die was released in 2012 as a Public service announcement by the Australia’s Metro Trains Melbourne. Because of its cheery cheekiness, it’s since gone viral and now clocks in at more than a hundred million views on Youtube, earning AMTM and the video’s creators very well-deserved pats on the back. 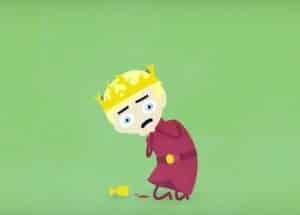 Of course, we can’t entirely promise the video will be spoiler-free — what’s the fun in that? We only hope that viewers like you will be the sporting sort and roll with the punches (or in this case, heads, hurr-hurr), and blithely forget about all the horribleness in the cartoon as you sit back and relax at your next GOT marathon.

And trust us, you may even find yourself cheering or a couple of deaths in the vid. Nope, I’m not telling which ones. Never, Not even in the slightest, not even if you put me up on a rack and lay my fingers open. Nah-uh.

This video also goes viral with impeccable timing: it premiers tomorrow in the US (or today, depending on which state you’re in),  and Monday in Ireland.