First Ever Head Transplant To Be Performed Despite Concerns

It seems like something out of a sci-fi novel, transplanting a head onto a living human. One Italian doctor says a head transplant could become reality by 2017.

Transplant trials on animals, such as dogs and monkeys, have shown that the procedure is possible. Dr. Sergio Canavero has dedicated his work to experimenting with this type of transplant. This type of procedure could change modern medicine forever. Although there are some ethical concerns, Canavero says this could change the lives of people suffering from cancer or a major accident.

The transplant procedure itself is very complicated and takes an estimated 36 hours to complete.
“First, the recipient’s head would have to be cooled to keep the cells alive, as would the recently deceased donor. Next, the neck is cut into and the blood vessels are hooked up by a series of small tubes. After the spinal cords are neatly severed, the head is then moved onto the donor body, which is ready for the trickiest and most crucial part: joining up the ends of the spinal cords.”

This part takes much concentration and the use of polyethylene glycol, a chemical that helps fatty cell membranes fuse together. Once the blood vessels and muscles are stitched back together, the patient is kept in a medically-induced coma for about a month while the body recuperates. After intense psychotherapy, the patient should be able to walk and talk.

Canavero has very few supporters. Many doctors have spoken out that the transplant is a dangerous and inhumane procedure.

Harry Goldsmith, a clinical professor of neurological surgery at the University of California, Davis, says, “This is such an overwhelming project, the possibility of it happening is very unlikely. I don’t believe it will ever work.”

Despite the lack of support, one man has already volunteered to be the first human to attempt to undergo the transplant. Valery Spiridonov of Vladimir, Russia suffers from a rare genetic disorder called Werdnig-Hoffman muscle wasting disease. The 30-year-old man understands the incredible risks, but is desperate for a miracle.
“Am I afraid? Yes, of course I am. But it is not just very scary, but also very interesting,” Spiridonov tells Daily Mail. “You have to understand that I don’t really have many choices… If I don’t try this chance my fate will be very sad. With every year my state is getting worse.” 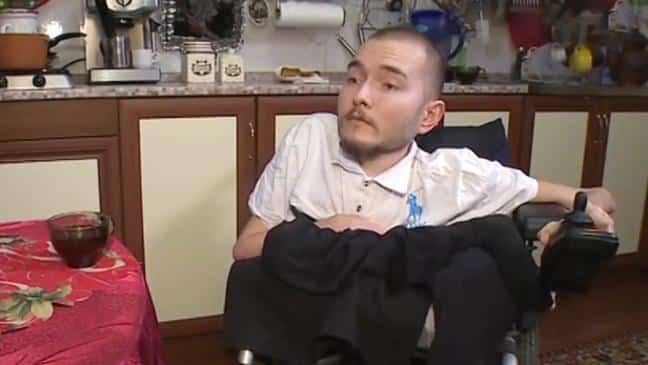 Many experts are speculating that if Spiridonov does not die, he will experience intense pain and extreme problems. Hunt Batjer of the American Association for Neurological Surgeons says he wouldn’t wish this on anyone. Arthur Caplan of New York University agrees that Canavero is nuts.

“Their bodies would end up being overwhelmed with different pathways and chemistry than they are used to and they’d go crazy,” he tells CNN. “Also, the high levels of anti-rejection meds will poison the body, and who knows if the recipients will fully gain the function of their new parts. It’s not like you can unscrew your head and put it on someone else.”

There is also the concerns of the medication that would have to be used to keep the recipients body from rejecting the donor head. The high levels of medication could cause more health problems to the patient, such as kidney or liver failure.

While the risks are large, Canavero says that he had a large number of willing participants to choose from. Once he chose Spiridonov, the two have talked over Skype but have not met in person.

Even though Canavero has a willing human subject, he still has many hurdles before he can reach what he refers to as HEAVEN, an acronym for head anastomosis venture; anastomosis is surgically connecting two parts. He still needs to secure funding, which he is doing through a number of ways like crowdfunding. He did receive a large monetary donation, but refuses to disclose the source. He must also recruit a major academic medical center to host him. Canavero has his eyes set on the American Academy of Neurological and Orthopedic Surgeons to give him the green light. If the American group will not support his endeavors, Canavero says he will try China.

Lastly, he will need a team to help him complete the tedious transplant attempt. The Italian doctor is currently putting together a team of 150 nurses and doctors. Just like the patients, he has a large number of willing volunteers to help him. Once complete, the team will need to practice for the next two years to be ready for the real deal.

With a 2017 deadline set, Canavero is receiving tons of flack from the medical community. Dr. Robert Ruff, the Veterans Affairs national director for neurology, calls it “farfetched and farcical, not to mention unlikely to work.” He says this is more like centuries away, not years. “It would be impossible to predict that far into the future,” Ruff says.

Canavero argues that sufficient research has been done. He cites many medical pioneers that have came before him. The first documented transplant of this type was documented in the 50’s. Performed by Vladimir Demikhov, the head and forelimbs of a puppy where grafted onto a completely different dog. Demikhov also followed that experiment with the attempt to create a two-headed dog. In both procedures, the subject only lived for a few days. The next milestone in head or body transplantation came in 1970. Dr. Robert White successfully transplanted a head on a monkey. White proved the procedure could be done, but he didn’t attempt to connect the spinal cord of the donor to the recipient, which resulted in the monkey being paralyzed and unable to breathe on its own. It only lived for nine days.

This documented history shows that the procedure can be done, but it raises serious ethical concerns. Still, Canavero is determined to perform a successful transplant on a human. He would like to master the procedure to extend the lives of those living with degenerating muscle or nerve conditions or those that are suffering from cancer.

#Wearyellowforseth: Why You Need A Yellow Tee For Next Friday [Video]