Ed Sheeran is into swords. Like, really, really into swords. He’s had a bit of an almost-fatal accident with Taylor Swift and an authentic replica of a sword from Lord of The Rings (and those replicas are as real as they can get, mind you, including sharp edges and all), but T-Swizzle’s cool with it, and supports Ed’s love for his fandoms. 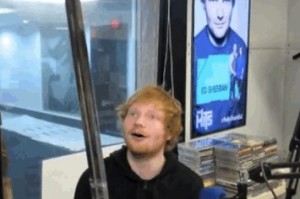 That’s why he just absolutely lost it when the NZ radio station The Hits gifted him with a replica sword from Game of Thrones, he just about lost it all over again.

“It’s Longclaw, the sword of Jon Snow” one of the hosts emphatically announced in pure cinematic gravity as Ed ripped into the wrapping and uncovered the sword’s beautiful packaging. He made quick work of sliding the box out, extracting and hefting the sword up for everyone to admire.

He thanks the good people at the radio station for his gift. “I didn’t get a lot of birthday presents, so this right one of the best birthday present I’ve ever got,” he shares. Aaaaw.

Ed Sheeran is a huge fan of Game of Thrones. It’s also no secret that he’s great buddies with GOT star Maisie Williams, and they send laughs and  support each other’s way via tweets. Just how big a fan is he of the series? Well…

since finishing game of thrones season 2, i find myself talking to people like im medieval

Yep. We’re right there with you, Ed. It is known.