Madonna explores a dystopic, post-apocalyptic city in the aftermath of a nuclear bomb in the music video for her single Ghosttown. 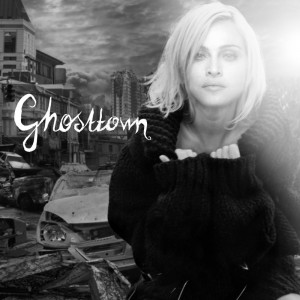 The single is one of the tracks off her thirteenth album, Rebel Heart, her newest collective offering of rebellious ballads and fierce love songs. Earlier this year, the a number of the albums songs and unreleased demos were leaked into the Internet, which led to Madonna and her team into a flurry to combat the leaks. “I haven’t slept in a week,” she bemoans, and denounces the leaks as a form of “artistic rape” and “a form of terorism” because it “destroys the artistic process.” Likewise, she thankd her fans for their “loyalty” in choosing to not listen to the leaked material.

In the video, Madge is joined by Terrence Howard, who plays Luscious Lyon in Empire. Looking resplendent in her top hat, finger-less gloves, and vest, she explores the ruins of an abandoned city, wielding a golf iron like a circus ringleader’s baton. Her actions alert a leery Terrence Howard, and soon he is drawn out from hiding and joins her in a choreographed dance of loneliness, longing, and belonging. A small child soon joins them, and they walk off together into the unknown future.

As part of her Rebel Heart multi-platform campaign, the video debuted on Meerkat, a new video-streaming app rivaling Twitter’s Periscope.

She is also one of the fiercest figures to take a stand for the “Free The Nipple” Campaign, taking her message to Instagram. Many other celebrities have stood with her, with Norman Reedus, Cara Delevigne, and Alyssa Milano being just a few of the stars to speak up about body acceptance and making breasts safe everywhere.

Madonna and Taylor Swift Perform Together at iHeartRadio Awards [Watch]