What a glorious day for Science!

When 5-year-old boy Wiley Brys went out one fine afternoon to bond over exploring an excavation site on a fossil hunt, his dad Tim had no idea what the day had in store for them.

Tim and Brys regularly dug for fossils behind a Mansfield, Texas shopping center, their most successful find being ancient fish fossils. The site, behind a grocery store at Matlock Road and Debbie Lane, while originally meant to be developed into a car park, held something even more astounding.

“[Wiley] walked up ahead of me and found a piece of bone,” Tim, a zookeeper, told the Dallas Morning News. “It was a pretty good size and I knew I had something interesting… It’s possible it could even be a new species.”

“My dad told me it was a turtle,” Wylie added. “But now he’s telling me it’s a dinosaur.”

True enough, the fossil in question is that of a nodasaur, a family of bony-plated dinosaurs of which the ankylosaurus belongs to. Experts believe that judging from the size of the fossils, this one was about the same height and size of a small pony, and is roughly a hundred million years old.

“Over the past few years, we’ve found a lot of really amazing things, but this is by far the most awesome thing we’ve found,” Tim says with a shy smile, all the while his son Wiley continues to dig and turn stones in the background of the interview. 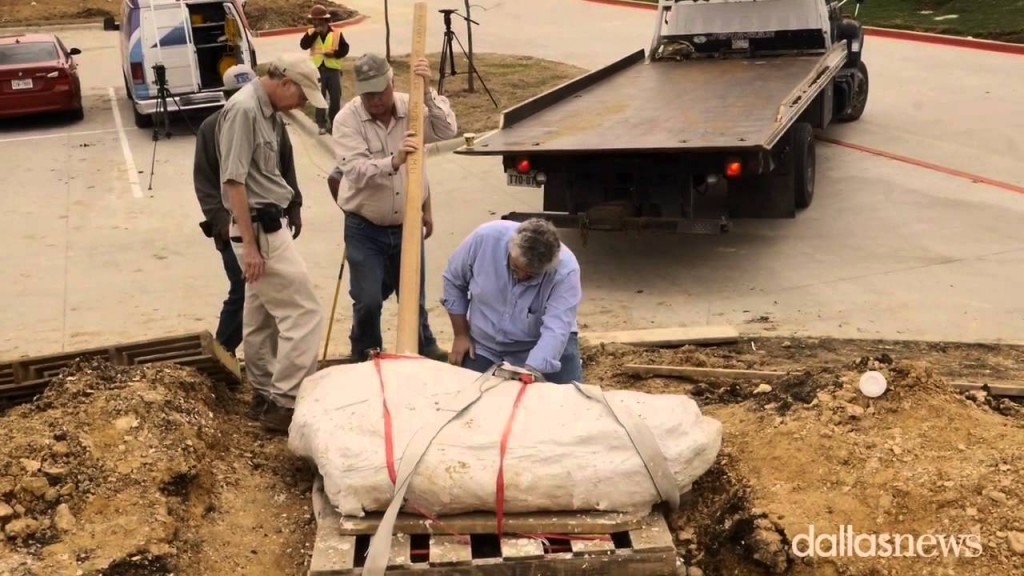 The bones are currently in the care and observation of paleontologists down at Southern Methodist University, where they will be cleaned, pieced together, and classified.

Dad Tim is overwhelmed with this once-in-a-lifetime event, while his son is thinks it’s pretty cool to actually find a dinosaur bone.  Dino-loving kids, and dino-loving kids-at-heart, completely agree.

Watch the News Report below: