Their names may have gotten them a lot of ribbing through the years, but it certainly hasn’t stopped them from having a wonderful life together. And now, guess who’s coming to the wedding to make it extra-special. 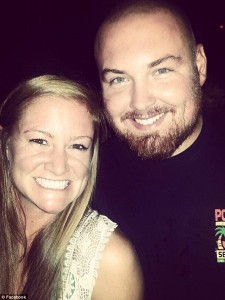 Meet Joel Burger and Ashley King. These two certainly seemed destined to be together, and other people could certainly see it right from the start. These two New Berlin kids knew each other right from their kindergarten years, but it was only at Fifth Grade that the Universe started paying attention.

Ashley explains the origin: “We had a yo-yo assembly …”

“I just remember they had a bunch of yo-yos. The guy at the assembly was a motivational speaker, and he used yo-yos.”

“After the man was finished with his motivational speech, he asked the two fifth-grade (student council) representatives to stand up as he wanted the students to applaud our efforts in helping set up his event. As soon as he said, ‘Joel Burger and Ashley King,’ he started to laugh out loud and pronounced we were ‘Burger King’ ” [source]

In time, they went to high school, the prom, and the homecoming together. The teasing was still there, but it seems it was only until after freshman college that Joel finally asked Ashley out, officially. They’ve both finally made peace with their names, and are pretty cool about it. In time, Burger slipped a ring on King’s finger, and the rest is history.

The wedding announcement soon went viral, and burger King (the fast food chain) finally picked up on the happy news, and decided to celebrate their big day in the best way possible.

“Burger King wants to help give you a whopper of a wedding,” a BK representative told the couple through a handwritten sign in a surprise Skype call. “In other words, it’s on us.”

“When we heard about the happy Burger-King couple, we felt an overwhelming urge to celebrate their upcoming marriage,” says Eric Hirschorn, a Burger King representative. “On so many levels, it felt like fate. They found each other and their story found us.”

Burger & King’s guests are now saving the date for July 17th in Jacksonville, Illinois. We wish Joel and Ashley all the best!