Jennifer Muhm’s and Malorie Catchpole’s daughters are reaching for the stars with their dreams. One of them loved trains; the other wanted to become an astronaut. The little was so excited for Halloween, and wanted badly to go in a tiny NASA orange jumpsuit. However, the costume catalog that arrived on their front door broke her heart.

‘She looked at me and said, ‘I can’t be an astronaut. They’re only for boys’,’ Muhm told ABC.

Muhm didn’t give up. She showed her daughter pictures of Sally Ride, Joan Higginbotham and other female astronauts, and with some careful planning, her daughter did go as the littlest astronaut at her Halloween party.

Their troubles didn’t stop there. Muhm and Catchpole soon realized that the clothing choices that had their daughter’s interests were completely absent in the Girl’s section, and were all over at the Boy’s section. These two moms decided this wasn’t sending the message they wanted their daughters to receive — so they created their own fashion line to do exactly that.

BuddingSTEM is an adorable line of dresses, leggings, and other apparel that gives a hearty nod to all things Science-y. It’s perfect for the little girl who loves playing with dinosaurs, daydreams about flying into outer space, or speeding along in her own choo-choo train. 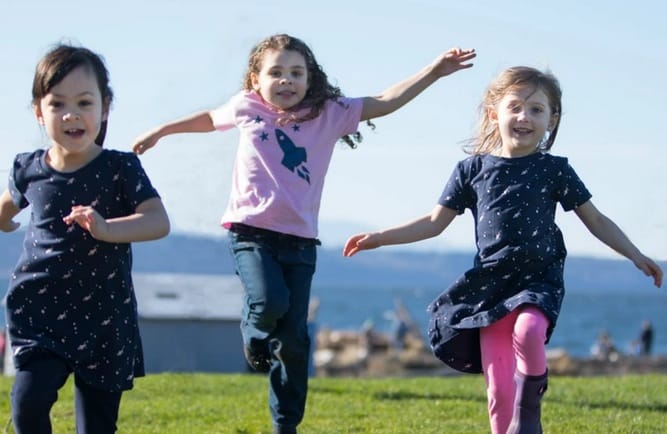 Muhm and Catchpole’s endeavors to place cute prints of dinosaurs, trains, and spaceships on girls’ clothing isn’t about saying nay to pink, glittery, princess-y things. “We’re not anti-princess,” Muhm shares with ABC News. “We’re not anti-girly. We just think there needs to me more than just that offered for our girls.”

One of the best things to take away from this is that these two moms have indeed shown their daughters girls can do anything they set their minds to. “One of the things that I’m happiest about … is what I think we’ve shown our daughters,” Catchpole said. “We’re two working moms. We don’t have a background in fashion, and we saw a need and we worked hard.”

Cards Against Humanity Creates Pack For a Good Cause