2014 and 2015 have been good years to Sia. The pop icon of the platinum blonde wig and heartbreakingly meaningful lyrics has once more made us feel all the feelings with her latest music video for Big Girls Cry. Her team-up with twelve-year-old Maddie Ziegler is still going strong and has proven to be a formidable force in shaking the art and Internet spheres with her powerful and compelling sense of dance and expression.

The video in itself is quite simple in execution — a wigged Maddie set against a black background, with the only changes around her being lights and a pair of disembodied adult hands that reach out to her from behind — and yet, there is something organic, disturbing and irrevocably powerful in Maddie’s expression and movement. We’re given images of hands reaching in — or crawling out — of her mouth, endless feeding where one loses an eye, gulping fish, and hands that lift her to a struggle. The wild-eyed, gaping look on her face as she takes in her surroundings at the end of the video leaves us haunted and brings us down to a rough, primal finale. 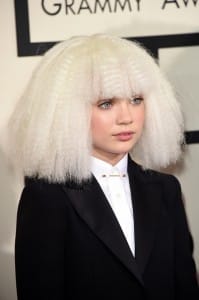 Maddie’s dance career at the Abby Lee Dance Company, a non-profit dedicated to training and grooming young dancers for success. Sia, a fan of reality TV, saw Maddie perform and instantly fell in love, saying it her “dream to hire her.” Phone calls were made, connections made, and Maddie began performing for Sia’s video for Chandelier on April 2014. Sia had high praises for the pree-teen dancer, saying Ziegler was “the most talented and professional individual I’ve ever worked with!”, and that “people were crying on set because Maddie is so other-worldly.”

We envision a long, fulfilling career for Miss Ziegler, and much professional and artistic growth to be had in the company of colleagues like Sia.