Rihanna decided the best way to help her pal Jimmy Kimmel celebrate April Fool’s was to be the very first to pull a prank on him — literally.

Rihanna joined him live on his show Jimmy Kimmel Live! to talk about the night before, and they rolled the clip to let us all in on the joke.

We’ve got to hand it to Ri-Ri: pulling off a prank of that level takes a lot of careful and discreet coordination not just with her team but also with Jimmy Kimmel’s home team. Jimmy’s wife Molly McNearney quietly lets 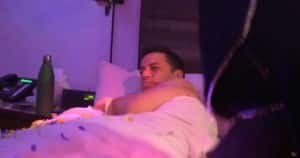 Rihanna and her crew through the front door, and soon has them tiptoeing around the house, up the stair, and into the bedroom. and just like that, BOOM! Confetti, fake dollar bills, and rave lights are everywhere, and a bewildered Jimmy is faced with Rihanna and her crew busting their moves to BBHHMM.

That, my friends, takes a lot of careful planning, and a strong will to keep secrets water-tight.

It seems that Ri-Ri’s crew are no exception to the rapper’s mischief. “My band: they’ve suffer the most,” he shares. “Because on the road you get a little bored, and you get into a little mischief — especially on the last shows …” She’s an excellent sport about it, though, and can get as good as she gives. “They either prank me, or [I] prank them, or both.”

BBHHMM (B*tch Betta Have My Money) is Rihanna’s latest single, and combines old school rap stylistics with a grittier edge to the melody and lyrics. It was slowly leaked through her Instagram account segment by segment, causing her fans to anticipate every piece with bated breath. The song was finally released in its entirety on Rap-Up.com. She also performed the fresh single live at the 2015 iHeartRadio Music Awards, disembarking from a solid black helicopter.

Jimmy Kimmel began dissecting the song’s lyrics: who exactly is this “b*ch”, and why does she owe you money?”

“Pending,” she replies, saying the video will reveal more clues to the song.

Rihanna and Eminem Do Ice Bucket Challenge On Stage [Video]